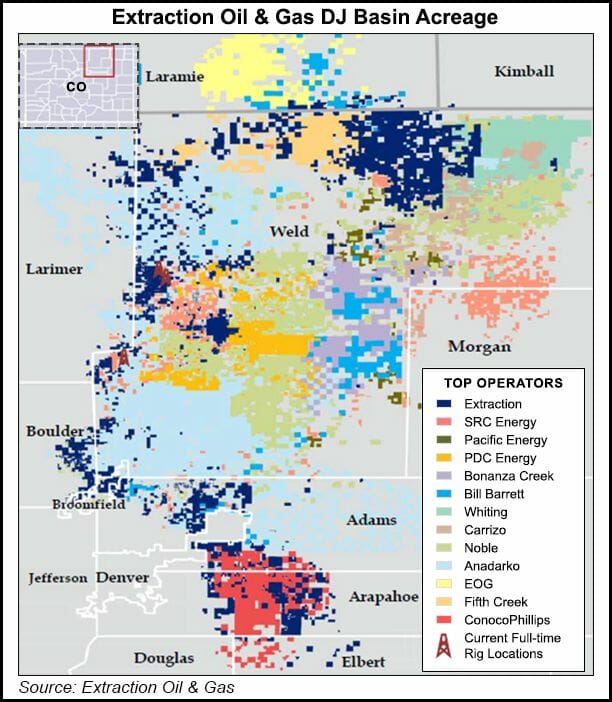 Extraction, which began trading publicly last year, has seen a surge in output from the Colorado operations this year and had predicted enhanced drilling techniques would help deliver double-digit growth. Net sales volumes in 3Q2017 totaled 62,884 boe/d, including 34,607 b/d of oil.

During a conference call to discuss quarterly results, CEO Mark Erickson predicted even stronger results production-wise are expected in 2018, as much as 75% oil and gas equivalent production growth.

Erickson pointed to milestones reached at the end of last month, including an operating agreement with Broomfield officials that culminated a year-long process to begin exploration and production (E&P) activity in the area. In addition, the company received approval from the Colorado Oil and Gas Conservation Commission for 10 spacing units in Adams County.

Extraction’s first test wells in Broomfield should be spud by early 2018, with development drilling underway by the end of next year, as the agreement unlocks 12,000 gross acres. Extraction has a total of more than 300,000 gross acres in the DJ.

As part of the agreement with Broomfield, Extraction committed to using advanced technology and operational best practices. The company is looking at “years of development” in its Hawkeye area, which includes leases in the Niobrara formation and Codell Sandstone area, Erickson said.

Hawkeye is “highly delineated,” with production results from 30 wells that are “on par with the best wells in the DJ Basin.” The company envisions up to 1,000 horizontal well laterals in the area at an all-in cost of $7,500/acre.*

Extraction now has more than 200 permits in hand or in processing, and it is in negotiations with midstream firms for oil and gas gathering infrastructure. Erickson is expecting “attractive rates” from providers, similar to what it has with providers in other parts of the DJ.

*Correction: In the original article, it was incorrectly reported that the company”envisions up to 1,000 horizontal well laterals in the Hackeye play areaat an all-in cost of $75/acre.” The correct cost is $7,500/acre. NGI’sShale Daily regrets the error.