Despite President Trump’s claim that his executive order (EO) will revive the nation’s coal industry, experts say otherwise — predicting coal will continue to lose ground to natural gas for power generation, and that a lengthy legal battle looms over plans to reevaluate or scuttle the Clean Power Plan (CPP). 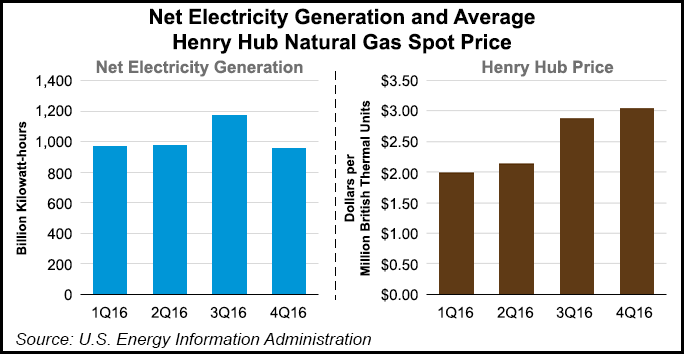 Meanwhile, the governors of California and New York have defiantly declared that their states will continue efforts to exceed the CPP’s environmental standards. Pennsylvania’s governor added that the EO “will do nothing to help coal communities.”

What’s in the EO

The EO signed by Trump on Tuesday calls for, among other things, the administrator of the U.S. Environmental Protection Agency (EPA) to review the proposed CPP, as well as a final rule governing standards of performance for greenhouse gas (GHG) emissions from new, modified and reconstructed stationary sources, and a proposed rule over federal GHG requirements for electricity generating units built on or before Jan. 8, 2014.

Several actions taken by the Obama administration, on energy and climate change issues, were revoked. The use of the “social cost of carbon” as a methodology to craft regulation was also withdrawn.

Trump’s EO ordered the secretary of the Department of the Interior (DOI) to lift a moratorium on federal leasing for coal production, and to review, rescind or revise final rules by its Bureau of Land Management (BLM) to regulate hydraulic fracturing (fracking) on federal and tribal lands, and the Waste Prevention, Production Subject to Royalties, and Resource Conservation Rule — also known as the BLM’s venting and flaring rule.

DOI Secretary Ryan Zinke signed two orders on Wednesday — the first to lift the aforementioned moratorium on federal leasing for coal production, and a second to implement DOI review of mitigation and climate change policies and guidance throughout the department. Zinke also signed a charter establishing a Royalty Policy Committee, which will focus on advising the secretary on the fair market value of, and collection of revenues from, federal and tribal mineral and energy leases.

“It’s important that taxpayers get the full value of traditional and renewable energy produced on public lands and that we ensure companies conduct environmental reviews under NEPA [the National Environmental Policy Act] and have reclamation plans,” Zinke said.

Megan Berge, a partner with the law firm Baker Botts LLP, told NGI that while the EPA is poised to start the rulemaking process on the CPP, it is unclear where the process will ultimately lead. But the process will certainly involve the 2007 case Massachusetts v. EPA, which the Obama administration used as its basis for regulating GHG emissions, as well as Section 111(d) of the Clean Air Act (CAA).

“No one exactly knows what the endgame is,” Berge said Wednesday. “Are they looking at just repealing and not regulating GHG for any source category under Section 111[d]? Or, is the endgame that they have a replacement or a revision, so they get something that is more legally defensible, and probably where the agency should have ended up in the first place?

According to Berge, Massachusetts v. EPA “remains good law, and there’s a basis for regulation of GHG somewhere under the CAA. It doesn’t have to be 111[d], but it remains a pollutant. EPA has a lot of discretion about how that is implemented or where it’s implemented, if it’s implemented at all. This story is not over.”

Berge said the Trump administration is poised to kick off a lengthy regulatory process — complete with notices, comments, stakeholder input and proposals — in order to arrive at a final rule that could pass the muster of legal challenges.

“At a minimum, you’re looking at basically three years, and that’s just to get a rule in place and through the D.C. Circuit [Court],” Berge said. “That doesn’t even count a Supreme Court challenge.

“These things take time. None of this is an instant fix. And folks who look at the EO and view it as an endgame or an outcome are really missing the point. Really, this is the new administration stepping onto the field, and now the game is going to begin, in terms of rulemaking and litigation.

“You’re going to see litigation going forward. To the extent that this administration were to pull back some of these rules that are pending [including the CPP] and did not in fact replace them, I think you would be inviting petitions for rulemaking from environmental groups, in addition to the challenges of the existing rules being withdrawn.”

Joshua Belcher, an attorney with the law firm Eversheds Sutherland (US) LLP, said the Trump administration is faced with a number of options. The EO, he said, gives the EPA administrator “a fairly wide berth to determine the best path forward.

“On the one hand, they could attempt to just simply roll back the CPP, which would require a new rulemaking,” Belcher said Wednesday. “That would be exceedingly difficult, not the least in part because they have to develop a rationale for explaining why the previous record in the rulemaking is no longer valid.

“I suspect EPA would have a much easier time taking the existing record that justified the current rules and deciding as a matter of policy that some far less stringent measure was appropriate.”

Belcher added that the Trump administration is “going to have to be cognizant of the fact that if they simply roll it back and don’t regulate GHGs at all, it opens the possibility that some future administration may be able to come through and again attempt to regulate GHGs.

“If the administration takes the middle road approach, and is able to develop some sort of palatable emissions standard or other approach that does address carbon pollution but in a manner that is financially feasible for industry, I think they would have a much smoother time of moving forward.”

Belcher said any rulemaking would take at least a year, “especially with one of this magnitude, and considering how vocal the public has been so far. They’re going to have massive comments roll in that the EPA is going to have to review. And of course, all along the way there’s going to be litigation challenging that.”

No savior for coal

Steve Clemmer, director of energy research and analysis for the Union of Concerned Scientists, told lawmakers on Capitol Hill that the EO alone would not be enough to reverse coal’s slow decline.

“Frankly, I think that the EO that came out yesterday is not going to do much to help the coal industry,” Clemmer said Wednesday during a hearing of the House Energy and Commerce Committee’s energy subcommittee.

“The fundamental problem is low natural gas prices [and] low prices for wind and solar. Even without tax credits, the prices for those technologies in some parts of the country are competitive, so I don’t think it’s going to fundamentally change that…The coal industry is really being hurt by a lot of the market factors and pressures, particularly from natural gas.”

But coal has enjoyed a brief respite. After falling in six out of seven quarters since mid-2014, the U.S. Energy Information Administration (EIA) said higher natural gas prices led to increased coal production in 3Q2016 and 4Q2016.

In a “Today in Energy” brief released Wednesday, the EIA said that during 3Q2016, “warmer-than-normal temperatures led to increased electricity generation — the highest on record for those three months combined — which resulted in higher consumption of coal compared to the first half of 2016.”

More than 90% of domestically produced coal is used for power generation. The EIA said that in December 2016, coal surpassed natural gas for power generation for the first time since January 2016. The Powder River Basin in Montana and Wyoming saw the largest increases in coal production in the second half of 2016.

In a joint statement on Tuesday, California Gov. Jerry Brown and New York Gov. Andrew Cuomo, both Democrats, called Trump’s executive order “profoundly misguided and [it] shockingly ignores basic science. With this move, the administration will endanger public health, our environment and our economic prosperity.

“Climate change is real and will not be wished away by rhetoric or denial. We stand together with a majority of the American people in supporting bold actions to protect our communities from the dire consequences of climate change.”

California and New York, which account for about 10% of GHG emissions in the U.S., have adopted tough environmental regulations, including advanced energy efficiency and renewable energy programs to meet and exceed CPP requirements. The states have also enacted the most aggressive GHG reduction targets in North America: 40% below 1990 levels by 2030, and 80% below 1990 levels by 2050.

“With or without Washington, we will work with our partners throughout the world to aggressively fight climate change and protect our future,” Brown and Cuomo said. Their joint statement said that the states “will continue to work closely together, and with other states, to help fill the void left by the federal government.”

“Nevertheless, Pennsylvania, as a major energy provider, will continue to reduce pollution thanks to market decisions in the power sector, increased reliance on clean energy and improved energy efficiency, and improved oversight of emissions of potent GHG such as methane.”

The CPP would require that states develop and implement plans to ensure power plants in their state — either as single plants or as a collective group — achieve goals for reducing CO2 emissions between 2022 and 2029, and final CO2 emission performance rates by 2030. The CPP gave states the option of choosing between either an emissions standards plan or a state measures plan to reduce emissions. They also had the option of trading emissions rate credits with other states.