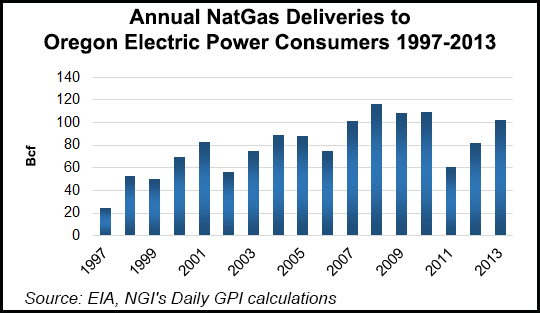 PGE officials said the Unit 2 addition, composed of 12 reciprocating engines, is designed for “maximum flexibility” that should help the utility meet real-time fluctuations in customer demand and integrate more renewable sources of power.

They said the Port Westward addition comes at a time when the PGE portfolio is further diversifying, bringing online the new 267 MW Tucannon River wind project, which started up Dec. 15.

“[The new unit’s] advanced technology and unique configuration allows PGE to ramp up the plant to full load in less than 10 minutes,” said Rick Tetzloff, Port Westward Unit 2 project manager. “This flexibility allows us to adjust quickly when renewable energy — like wind or solar — rise and fall with natural variability.”

These schedules are intended to allow NW Natural to provide no-notice gas storage service from Mist and are specifically designed to support services associated with the proposed PGE plant expansion, according to CEO Gregg Kantor, who in recent quarterly earnings conference calls has acknowledged that negotiating a contract with PGE has been tough to consummate.

Those negotiations are still ongoing with the new year, a NW Natural spokesperson told NGI on Friday.

PGE’s newest gas-fired unit is adjacent to its older Port Westward unit and its Beaver plant in Columbia County, OR, northwest of Portland, along the Columbia River. The $300 million addition was begun in May 2013, requiring the installation of the dozen 25,000 hp reciprocating engines from Wartsila North America.

“The addition was completed ahead of schedule and on budget under fixed-price contracts,” PGE officials said. Black & Veatch and Oregon-based Harder Mechanical Contractors Inc. in a joint venture managed the design and construction of the Unit 2 project.