Less than two weeks after the Trump administration rejected Plains All American Pipeline LP’s request for an exemption to a tariff on imported steel it already purchased for a pipeline in the booming Permian Basin, the COO urged House lawmakers to work to improve the exemption request process. 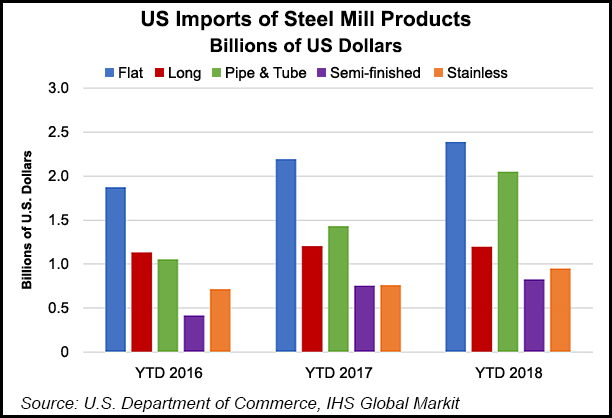 COO Willie Chiang, who is to become CEO of Plains, told the House Ways and Means Subcommittee on Trade on Tuesday that there were “significant flaws” in the process that the Commerce Department established in March for companies to seek an exemption to the 25% tariff, took effect that month. The White House said the tariffs are justified on national security grounds, citing Section 232 of the 1962 Trade Expansion Act and Section 301 of the Trade Act of 1974.

“It is essential that Congress help rectify flaws in the way Section 232 tariffs and the exclusion request process have been implemented,” Chiang said in written testimony. “We believe by making certain improvements to the Section 232 process, Congress and the administration can achieve President Trump’s objectives for revitalizing the steel industry while promoting U.S. energy dominance.”

Plains has recommended that international steel orders placed prior to the imposition of the tariff be exempt. Chiang also said critical infrastructure project components should be exempt. The company recommended that individual companies, not the federal government, be recognized as the arbiter for making technical decisions regarding product specifications.

The company also recommended that companies be given due process during the course of the exemption request process, and be allowed to consolidate exclusion requests by project or purchase order instead of requiring individual filings for nearly identical products.

“Recognizing that line pipe represents approximately 5% of the total volume of steel imports, we also ask that Congress and the administration consider exempting line pipe from steel tariffs and quotas until the U.S. steel industry is able to build the capability and capacity to timely manufacture the line pipe required to meet America’s energy production growth,” Chiang said.

Commerce’s Bureau of Industry and Security (BIS) in mid-July rejected Plains’ request for an exemption. The company requested an exemption in advance of building the Cactus II Pipeline, a $1.1 billion project designed to connect the Permian Basin in West Texas to the Corpus Christi area in South Texas with a takeaway capacity of 585,000 b/d.

Plains’ filing showed that it had previously contracted Greece’s Corinth Pipeworks Pipe Industry SA for 26-inch outside diameter (OD) high frequency welded (HFW) pipe needed for the project. Plains said Corinth was “one of only three mills in the world” capable of producing the pipe, and the other two mills are in China and Japan.

“American mills either did not bid for the project or submitted alternative specifications for the 26-inch pipe option that were not acceptable for Cactus II’s project design,” Chiang said. He later added that the steel it purchased from Greece “is arriving in multiple shipments, which started earlier this month and will continue through the end of this year.”

BIS records show that Berg Steel Pipe Corp., which is based in Panama City, FL, had objected to the request. Berg said while no domestic steel manufacturer could produce 26-inch OD HFW pipe, there were many U.S. sources for an alternative product: double submerged arc welded pipe, in both longitudinally welded and helically welded forms.

However, Chiang said the denial of the exemption appeared to be based on an analysis by the International Trade Administration (ITA), a Commerce agency. According to Chiang, ITA said the steel needed for Cactus II “is produced in the United States in a sufficient and reasonably available amount and of a satisfactory quality,” but it provided no additional details.

“Although we have sought to receive the supporting data generated by the ITA through multiple avenues, we have not yet been provided with that analysis,” Chiang said. “Due to the opaque nature of the process, we can only assume that Commerce’s determination is based on a review of a combination of the objectors’ submissions, which appear to not be required to be substantiated, and other undisclosed data by staff — without interaction with the applicant.”

Chiang said there is no formal process for an applicant to rebut objector comments. Although Plains submitted a rebuttal to the BIS, “we still do not know whether our rebuttal was considered in the exclusion request review process. Additionally, we are unaware of an opportunity to appeal the exclusion request denial.”

“We have already begun to receive shipments of the steel, so even if we were able to substitute product specifications, it is too late to cancel our order from Greece and shift it to a U.S. mill without incurring substantial economic loss and major delays in the schedule, a timeline which is critical to maintain in order to support continued Permian Basin production growth.

“The denial of this tariff exclusion merely punishes an American company for developing a project that supports our national interest.”

Last week, officials with the American Petroleum Institute (API) said members were frustrated by the exemption request process. API, the Center for Liquefied Natural Gas and the Association of Oil Pipe Lines in March urged the White House to reconsider the tariffs.That same month, more than 100 members of Congress sent a letter to Trump expressing concern over the tariff.

“These observations were prophetic as we are now dealing with certain of the same concerns identified in the letter,” Chiang said.

Plains announced in November that CEO Greg Armstrong plans to retire at the end of 2018 and that Chiang would succeed him.