Exelon Generation plans to invest more than $300 million in capital projects to upgrade its nuclear power plants in Illinois as a result of sweeping clean energy legislation passed last month. 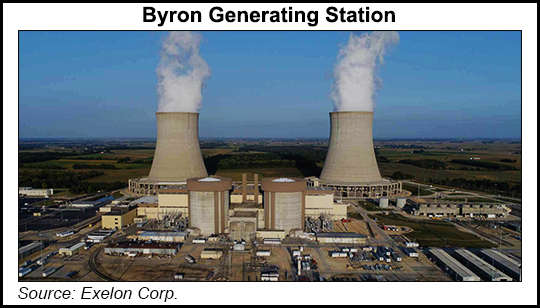 Gov. J.B. Pritzker in mid-September signed Senate Bill (SB) 2408 to put Illinois on a path toward 100% renewable energy by 2050. The bill provides nearly $694 million in subsidies over five years for the Exelon Corp. subsidiary’s Byron, Dresden and Braidwood nuclear stations, which had previously been slated for retirement.

Exelon said it “is moving quickly to fill 650 vacant positions across the state” and to jumpstart work on the projects at the Byron and Dresden nuclear plants.

“With this landmark legislation in place, we are moving quickly to restaff and refuel all of our nuclear plants for 24/7 operation, producing carbon-free, baseload electricity for more than 10 million homes and businesses,” said Exelon Generation’s Dave Rhoades, chief nuclear officer. “These plants are not only important for the clean energy they produce, but they are massive economic engines for their local communities,” which could contribute more than $1.6 billion to the state’s gross domestic product each year.

Exelon said saving the plants “preserves two-thirds of the state’s clean energy, avoids a 70% rise in emissions, protects 28,000 direct and indirect jobs, and prevents a $480 million increase in annual energy prices for consumers.” Recent and upcoming retirements of nuclear and coal-fired power plants also have contributed to current tightness in the global natural gas market ahead of winter.

Exelon’s nuclear fleet produces more than half of the electricity generated in Illinois. It also supplies 90%-plus of the state’s carbon-free power.

Coal- and oil-fired units, meanwhile, must achieve zero emissions by Jan. 1, 2030 under the new law.

Power generating units would be allowed to remain in operation, however, “if it is determined that ongoing operation is necessary to maintain power grid supply and reliability.”

SB 2408 also creates a “coal to solar program to support the transition of coal plants to renewable energy facilities,” and authorizes the governor to create a commission on market-based carbon pricing solutions. In addition, the bill targets one million electric vehicles in the state by 2030.

Analysts at ClearView Energy Partners LLC called SB 2408 “perhaps one of the largest energy policy bills we have seen in a state legislature.”

Federal and state officials, along with environmental groups, celebrated the bill’s signing.

Illinois House Speaker Emanuel Welch said, “The magnitude of this legislation cannot be overstated,” adding, “We have a clear path to a carbon-free future with a more diversified energy sector that includes some of the strictest utility ethics reforms in the country.”

The Natural Resources Defense Council’s J.C. Kibbey, Illinois clean energy advocate, said the bill “not only takes major action on climate change, it supports disadvantaged communities and those transitioning away from fossil fuels…Today Illinois has become a leader in making policy that addresses the deep ties between climate change, pollution, and social equity.

“We hope our work here can inform states across the Midwest and the country.”