Many people look back during the holiday season and reflect about how quickly the year has passed, but if “time flies when you’re having fun,” 2016 could not end soon enough for the oil and gas industry. 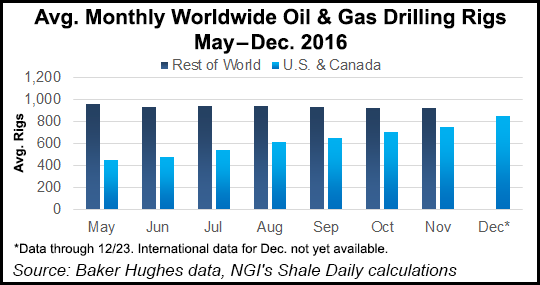 Evercore ISI’s James West and his team of analysts said most of 2016 has been punctuated by an unprecedented downturn that shook the oilfield services (OFS) industry to its core, as exploration and production (E&P) companies continued to retreat.

“Marked by bankruptcies, layoffs, salary cuts, strikes and geopolitical turmoil, 2016 will forever remain a historic trough in the storied legacy of OFS,” West said in Evercore’s wrap-up of 2016. “However, the night is darkest just before the dawn, and 4Q2016 has set the wheels in motion for what we believe to be a robust and sustained upturn.”

Rigs once again are coming off the stacks and back into North America’s key onshore basins. Fracture crews are cranking up the pumps, and sand and pipe haulers “have taken back to the open road, and rural oilfield towns all across the patch have found a renewed sense of optimism,” West said.

As expected, North America should be the “first and fastest to recover, and we have seen this begin to play out in the U.S. rig count and in service pricing improvement.” Meanwhile, international OFS activity should begin to stabilize in 2017 and track methodically upward as upstream spending improves in a few select geomarkets.

The news isn’t as optimistic for the offshore, although a trough is likely in late 2017 or early 2018, and cost efficiency gains and regional-specific catalysts should drive a base level of activity moving forward, according to Evercore.

The industry isn’t waving a fond farewell to 2016, which will be “ruefully remembered as the culmination of a historically brutal downturn,” West said. “The year is concluding on a hopeful note, however, as rig counts, oil prices and stock prices have all risen substantially from their depths and should continue their respective ascents into the New Year.”

“With clear visibility of an industry recovery, we carry our constructive view of OFS into 2017,” West said. “In the wake of a historic downturn, we now project global E&P capex to increase by 1.7% in 2017, the first increase since 2014.”

Global upstream spending fell by 27% in 2016, following a 21% plunge in 2015, to reach its lowest levels since 2009. The two-year stretch marked the first consecutive annual decline since the mid-1980s. North America now should usher in the upcycle.

Evercore earlier in December forecast global E&P capital expenditures (capex) would increase 21% in 2017, led by a 25% increase in the United States. Canadian capex is expected to pivot upward by around 10%.

According to Wood Mackenzie, the global oil and natural gas industry will turn cash flow positive in 2017 for the first time since the downturn if the reduction in output promised by the Organization of the Petroleum Exporting Countries (OPEC) drives oil prices above $55/bbl.

The 4Q2016 U.S. land rig count had averaged about 553 at mid-December, but incremental additions now should lead to a more optimistic exit rate that is closer to 628. Based on the rising rigs, Evercore bumped up its 1Q2017 forecast to 677 from 552 to reflect the higher-than-expected 2016 exit rate.

“While we expect completion spending to continue to gain a greater portion of the drilling and completion capex pie as completion intensity continues to increase, falling rig rates (on an annual basis) should allow rig counts to enjoy similar growth rates, at least for 2017,” West said.

The analyst team thinks 2017 will mark the first year of a “robust and sustained upcycle for the oilfield service space as domestic constraints to production limit U.S. growth and the decline curve takes its toll internationally.”

The agreement reached by OPEC members and allies to stabilize global oil production, along with the “Trump Bump,” Evercore said, have given investors more “comfort” around the ramp of the recovery.