Energy Transfer Partners LP (ETP) has secured capacity commitments from some leading Appalachian gas producers for its planned 2.2 Bcf/d pipeline to carry Marcellus and Utica shale gas from area processing plants to multiple markets. With an open season under way, the project could grow to 3.25 Bcf/d, ETP said. 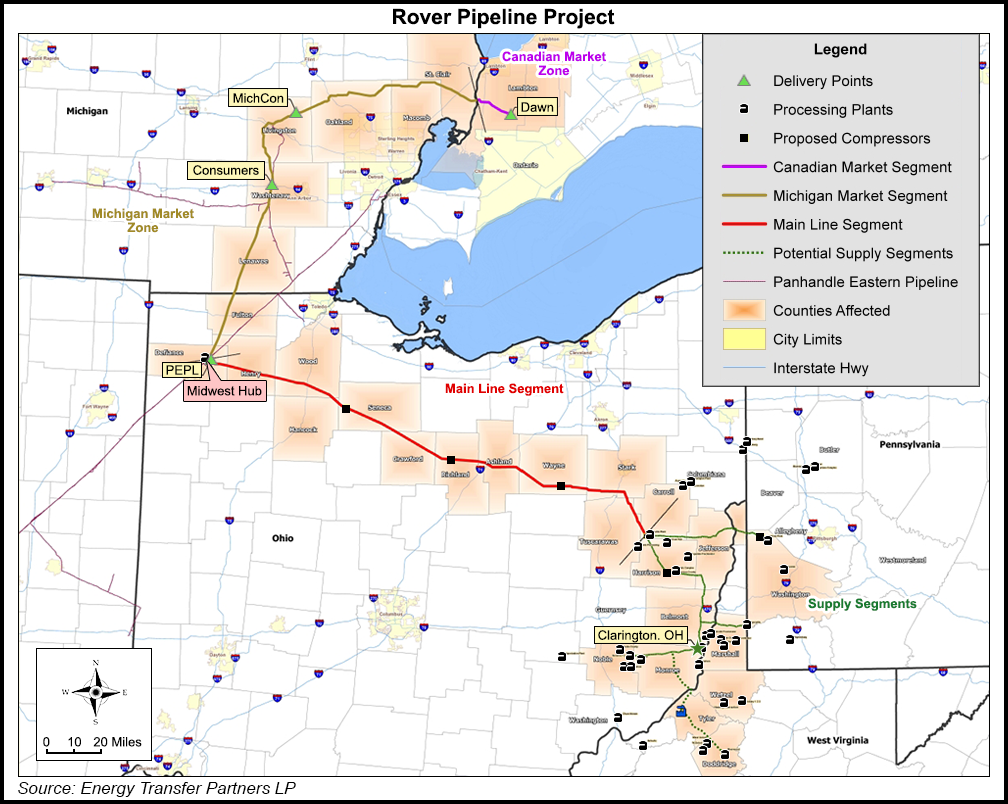 The project would be constructed in two stages. The first would access ETP’s existing Panhandle Eastern Pipe Line (PEPL) and other Midwestern pipelines. A second stage would access the Dawn Hub in Ontario via a new pipeline segment.

In support of the project, called ET Rover, ETP is holding a binding open season through July 25.

The first approximately 380 miles of 36- and 42-inch pipeline for Rover would enable the flow of gas from processing plants and interconnections in Pennsylvania, West Virginia and Ohio to points of interconnection with PEPL and another Midwest pipeline near Defiance, OH. Shippers in the ET Rover project also would be able to transport to Trunkline Zone 1A delivery points via the interconnection with PEPL, to access existing and new industrial markets and potential liquefaction export markets in the Gulf Coast.

Additionally, ETP expects to construct an approximately 195-mile segment from the Defiance area through Michigan and ultimately to the Union Gas Dawn Hub near Sarnia, ON, providing producers with access to diverse markets and end-users in Michigan and Canada with access to Marcellus and Utica gas.

The project would include installation of approximately 194,000 hp of compression at five new mainline compressor stations, and construction of six new delivery meter stations along the mainline pipeline. It would also include construction of 197 miles of 24-, 36- and 42-inch diameter supply laterals, about 38,000 hp of compression at five new compressor stations, and various new receipt meter stations in the supply areas.

ETP said it has received sufficient commitments and board approval to build the pipeline to Defiance and anticipates receiving sufficient volumes to justify building to Dawn.

ETP plans to have initial service to the Midwest Hub near Defiance, and to Gulf Coast markets by the fourth quarter of 2016. Remaining service to markets in Michigan and Canada is expected to be available by the second quarter of 2017.

Rover is only the latest project to target a way out of the Marcellus/Utica for the growing and increasingly bottled-up production there.

Rockies Express Pipeline LLC recently filed with FERC for a project that would create 1,200,000 Dth/d of east-to-west firm capacity within the pipeline’s Zone 3 with the intent of moving Appalachian gas to the Midwest with avenues to branch off toward the Gulf (see Shale Daily, June 24). Boardwalk Pipeline Partners LP is currently holding a binding open season for its Northern Supply Access expansion of Texas Gas Transmission, a project that would provide for receipts of Marcellus and Utica shale gas seeking markets in the Southeast and Gulf Coast (see Daily GPI, June 24). Kinder Morgan’s Tennessee Gas Pipeline has been providing capacity out of the region, too (see Daily GPI, April 22). Recently, TransCanada Corp.’s ANR secured almost 2 Bcf/d of firm commitments on its Southeast Main Line (see Shale Daily, March 31).

Producer Range said Thursday that it signed up for 400,000 MMBtu/d of capacity on ET Rover for 20 years starting in October. Since gas will be supplied directly from a regional processing plant, there will be no additional transportation charge to move to access markets via ET Rover.

Range has also executed two additional fixed-term ethane sales agreements that are subject to successful project completion. The first contract will potentially supply an affiliate of Sasol Ltd. with 10,000 b/d of ethane for a multi-year term. Range expects to utilize its ATEX transportation capacity to supply the contract. Sasol anticipates reaching a final investment decision later this year on its proposed 1.5 million ton per annum ethane cracker and derivatives complex near Lake Charles, LA. The second ethane agreement would supply ASCENT, the petrochemical complex planned by the Odebrecht Organization in Parkersburg, WV. The ethane agreement commits Range to 5,000 b/d for 15 years. ASCENT ethane is to be supplied from a regional processing plant, resulting in no additional transportation fee to Range.

“Range’s marketing team continues to expand our marketing capabilities for natural gas and ethane,” said Range CEO Jeff Ventura. “The Rover pipeline provides Range flexibility in selling natural gas to high-demand markets in Canada and the Gulf Coast, while the LNG and ethane supply agreements further diversify and strengthen our customer base with industry-leading companies. Importantly, these various contracts support our plan to grow production by 20% to 25% for many years giving us base contracts in place with leading companies in key areas that allow for possible future expansion.”

ETP plans to submit its certificate application to the Federal Energy Regulatory Commission in January, or as soon as Commission staff finds that the project’s draft resource reports are complete. ETP is asking the Commission to issue a certificate by November 2015.

“This FERC Order date is necessary so that transportation services from the supply laterals to the Midwest Hub delivery points are in service by December 2016,” the company said in FERC pre-filing documents. “The project segment from the Midwest Hub to the Union Gas Dawn Hub, ON, Canada, is proposed to be placed in service in June 2017. ET Rover will submit a complete draft of Resource Report No. 1, a list of alternatives, and a list of affected landowners within 30 days of the FERC notice approving the use of the Pre-filing review process.”

An ETP spokeswoman did not respond to a request for more information about the project.