Equitrans Midstream Corp. said late Thursday it has flooded a natural gas storage well that had leaked for more than 10 days, releasing over 1 Bcf into the atmosphere, according to preliminary estimates. 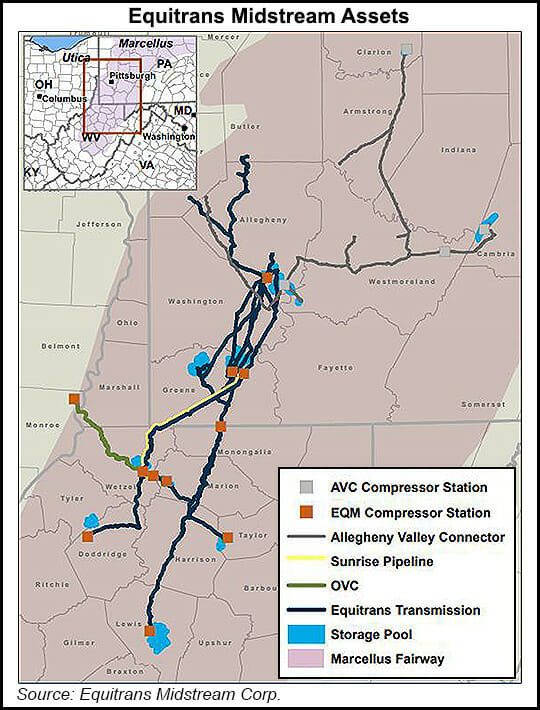 Spokesperson Natalie Cox told NGI the leak was discovered on Nov. 6. The company worked through a series of setbacks with Texas-based Cudd Well Control to stop the leak at the Rager Mountain Storage facility in Cambria County’s Jackson Township, about 70 miles east of Pittsburgh. No injuries were reported and area residents were not ordered to evacuate at any time.

Equitrans said crews flooded the well around around noon ET on Thursday to stop the flow of natural gas. Crews were preparing to plug the well Friday. Equitrans said work could extend into the weekend.

Equitrans technicians found gas escaping from a small vent on the George L Reade 1 well after they responded. It is one of 10 operating storage wells at the facility, which has a capacity of 9 Bcf. Equitrans said the valve was working to relieve pressure from the casing as designed.

The company said a “conservative estimate” pegged the leak at 100 MMcf/d. “We are unable to provide an accurate account of the gas loss until an inventory verification study is completed,” Cox said Thursday.

Equitrans withdrew gas from four storage wells at the facility late Thursday to reduce pressures in the field. Customer nomination levels had been met, but the company had no estimate for when the facility would return to full service. The well was drilled in 1965 to produce oil and gas before it was converted to storage.

Pennsylvania Department of Environmental Protection spokesperson Lauren Camarda told NGI that regulators were at the site until the well was brought under control.

The company said it would coordinate with federal and state regulators to complete a root cause analysis after plugging operations were completed. An environmental assessment is also planned.

The facility in the center of the Appalachian Basin was full as the winter heating season gets underway. The leak represents a major loss of natural gas.

By comparison, the Aliso Canyon storage facility near Los Angeles leaked 109,000 metric tons, or roughly 4 Bcf, over a 112-day period between October 2015 through February 2016. That incident was the largest methane release in U.S. history.