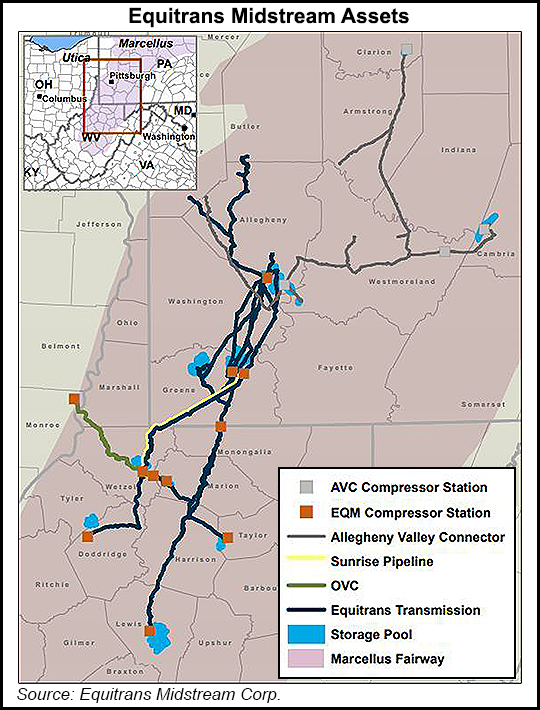 Equitrans, the third largest natural gas gatherer in the United States with operations in Ohio, Pennsylvania and West Virginia, this month cut its net income guidance for next year to $540-610 million. That’s down from the 2020 forecast that was issued at about the same time last year calling for $1.05-1.10 billion of net income.

Appalachian pure-play EQT Corp., Equitrans’ largest upstream customer and the Lower 48’s biggest natural gas producer, renegotiated its midstream contracts for fee relief in the coming years that kicks in beginning in 2021. Meanwhile, producers across the country have continued to curb spending and limit output amid lackluster commodity prices and weak demand during the Covid-19 pandemic.

The midpoint of the company’s financial forecast assumes an average of 8 Bcf/d of total gathered volume. The company also said that 70% of its forecasted operating revenue next year is expected to be generated from firm reservation fees.

Equitrans is forecasting capital expenditures of $1.04-1.14 billion next year for gathering, transmission and water costs. Also included in that total is the Mountain Valley Pipeline (MVP) project, which has faced repeated regulatory delays and cost overruns. The company expects to spend up to $720 million on MVP this year. The financial forecast assumes MVP will enter service by Dec. 31, 2021.

Since receiving its Federal Energy Regulatory Commision certificate in 2017, MVP has faced relentless opposition from environmental advocates. In response to legal challenges spearheaded by these opposition groups, federal courts have issued numerous adverse rulings that have led to construction stoppages and delays.

When construction on the system started in 2018, the pipeline was estimated to cost $3.5 billion and be in service by the end of 2018. MVP is now forecasting the 2 Bcf/d system, which would move Appalachian natural gas to the Southeast, to cost up to $6 billion.