A modest recovery in the U.S. rig count is expected in the last half of this year, but the damage done to the oilfield services sector will hamper a robust recovery, according to Raymond James & Associates Inc. 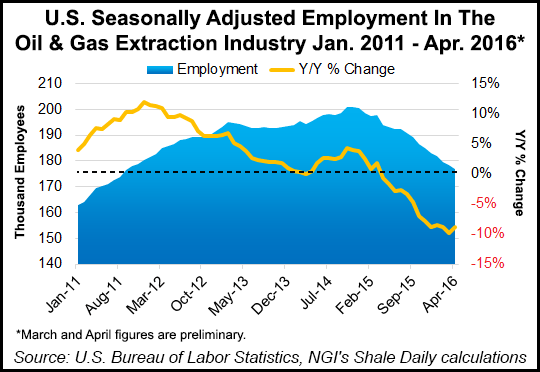 Analysts J. Marshall Adkins and Praveen Narra said in a note that based on conversations with OFS providers and industry insiders, “we now believe the pace of the U.S. rig count and oilfield activity recovery in 2017 will be slowed” by three things:

The domestic rig count percentage-wise has fallen 80% since late 2014, coupled with OFS spend that is down around 90% — one of the most devastating downturns ever experienced, the analysts said. The OFS sector has been cold stacking equipment and joined the E&P sector in laying off thousands since oil prices balked in 2014 (see Shale Daily, April 25; April 22). Baker Hughes Inc. in April predicted a slight rebound in the North American rig count later this year, but it also expects to see a 30% decline before stabilizing (see Shale Daily, April 27).

With crude oil prices recovering to around $50/bbl, the U.S. rig count may have found “at least a shaky bottom,” the Raymond James analysts said. The latest Baker Hughes Inc. count showed the U.S. rig count at 403, the same as the previous week (see Shale Daily, May 27).

“A modest recovery ahead is supported by a 23% increase in new well drilling permits filed in May compared with March. While it is certainly possible that the U.S. rig count still crosses below the 400 rig threshold, we expect it to stay at roughly current levels for the next few months.”

Many of the large-cap E&Ps and Permian Basin-levered operators may begin raising rigs in the next few months, but most players “will sit on the sidelines” until at least the final three months of this year if and when there’s confidence that higher prices are here to stay. Any rig demand increases in the next two quarters also may be offset by rigs falling off term contracts.

The Raymond James analysts haven’t changed their expectations for the timing of a recovery, but they have changed their view on the pace of it. In addition to the weak balance sheets, labor constraints and lack of equipment, the drilled but uncompleted (DUC) well inventory is expected to suck capital away from rigs and be redirected to completions.

“Even though oilfield spending may be increasing in late 2016, it may not show up in the rig count,” Adkins and Narra said. “From a timing perspective the initial impediments to rising U.S. rig counts will be the DUCs and E&P company balance sheet concerns.” When E&Ps begin spending in early 2017, “we think labor will quickly become an issue both for rigs and pressure pumping.”

By the last half of 2017 the attrition in pressure pumping/fracturing equipment should become evident, emerging as the “largest constraint,” according to the analysts.

Models suggest that the U.S. oilfield is likely to begin running out of high horsepower capacity for fracturing by mid-2017. “That may become the largest activity hurdle to overcome,” analysts said, “since it will take time for the industry to restructure balance sheets, order new equipment and take delivery all while the existing equipment base continues to deteriorate.”

Constraints likely would persist into 2018, and even labor constraints may begin to ease, “capacity attrition, particularly for pressure pumping equipment, is likely to keep a lid on rapidly increasing drilling activity,” as producers aren’t going to drill wells they can’t complete.

Some OFS operators have said the first 25-50% increase to the rig count, about 100-200 rigs, could be manageable since current staffing could handle the surge. However, once U.S. activity bumps beyond 600 rigs, which is the year-end 2016 model, additions are going to cost more and take longer as training programs for new hires take months to complete.

“Recent discussions with industry participants indicate it could take about a year to double the U.S. rig count once operators begin to ramp activity,” Adkins and Narra said. “Since we don’t expect the activity ramp to start until late 2016, it seems impossible that the U.S. average rig count could double between 2016 and 2017 even if the cash flow is available.”