Equinor ASA, an enthusiastic buyer in the early days of the Lower 48 unconventional oil and gas revolution, has put the portfolio in reverse, with the Bakken Shale the latest to change hands. 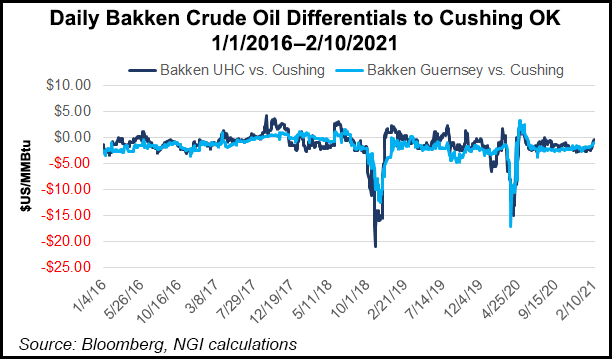 The Norwegian major said Wednesday it agreed to sell its North Dakota and Montana assets to EnCap Investments-backed Grayson Mill Energy for around $900 million. The transaction covers all the operated and nonoperated leasehold, about 242,000 net acres, along with the associated midstream assets.

“Equinor is optimizing its oil and gas portfolio to strengthen profitability and make it more robust for the future,” CEO Anders Opedal said. “By divesting our Bakken position, we are realizing proceeds that can be deployed toward more competitive assets in our portfolio, enabling us to deliver increased value creation for our shareholders.”

Production from the Bakken in 4Q2020 was 48,000 boe/d net. In parallel with this transaction, Equinor Marketing and Trading is entering into a term purchase agreement with Grayson for crude offtake.

In the past few years, Opedal noted, Equinor has improved the Bakken projects’ safety, costs and carbon dioxide intensity, “and I am confident Grayson Mill Energy will continue on this path.”

The actions are designed to improve the international segment’s profitability, and the Bakken sale “is an important step in this process,” said Equinor’s Al Cook, executive vice president of Development & Production International. “We have worked closely with Grayson Mill Energy to preserve jobs and to ensure the transfer of expertise in the best possible way.”

As part of the transaction with Grayson, “all Equinor field employees and a significant number of the support teams working on the Bakken assets will have the opportunity to transfer,” the operator said.

Equinor, under its former moniker Statoil, was one of the first European majors to place big bets on Lower 48 fields.

Since the turnaround in commodity prices and of late a ramp in unconventionals, Equinor has set a new direction.

In 2019, Equinor sold the Eagle Ford portfolio in Texas for $325 million to Repsol SA, which earlier bought Talisman. The Marcellus holdings also have since been whittled down through various sales.

Equinor continues to produce from unconventional leaseholds in Ohio and Pennsylvania, and it remains one of the biggest operators in the Gulf of Mexico.

In the United States, the operator employs about 750 people, mostly in Houston. Equinor also has satellite offices in Stamford, CT, and Washington, DC, with field offices in North Dakota and Ohio.