A consortium led by Norway’s Equinor ASA has struck oil in the central U.S. Gulf of Mexico (GOM), the 67% state-owned supermajor said Monday. 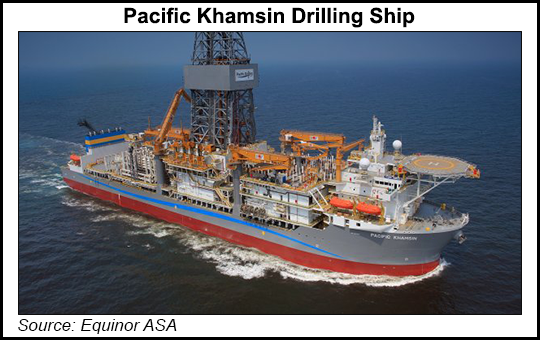 The Monument exploration well encountered about 200 feet of net oil pay with good reservoir characteristics in Paleogene sandstone, providing an early indication of the productive reservoir at the well location, Equinor said. The well was drilled to a total depth of 33,348 feet using the Pacific Khamsin rig owned by Pacific Drilling.

Equinor’s Bjørn Inge Braathen, senior vice president of exploration for North America, said management was encouraged to have “proved an accumulation of movable hydrocarbons in the Monument exploration well. However, determining the full potential of the discovery will require further appraisal drilling.”

Equinor operates the well with a 50% interest. Other stakeholders are Progress Resources USA Ltd. (30%) and Repsol E&P USA Inc. (20%). Repsol is a subsidiary of Spain’s Repsol SA and Progress is a unit of Malaysian national oil company Petroliam Nasional Berhad, aka Petronas.

“In the current low oil price environment, Equinor’s Monument discovery is a welcome one for the partners,” said Wood Mackenzie’s Mfon Usoro, senior research analyst, on Monday. “The discovery proves the mature region still has more life in it.”

However, Usoro said, “It is likely that appraisal efforts at Monument will take a back seat until prices recover.”

Equinor has suspended its Lower 48 onshore drilling and completions activity entirely, and slashed total organic capital expenditure by 20% amid the price war and coronavirus-induced collapse in demand facing the global oil industry.

Usoro also cautioned that Equinor “could face technical challenges with the complex and often compartmentalized Paleogene reservoir. Based on the drill depth of more than 32,000 feet, the discovery could be similar to other high-pressure fields” that require 20,000/square inch-rated equipment, “which indicates significantly higher development cost.”

Citing that Monument is Equinor’s first discovery as an operator since the Yeti and PowerNap discoveries in 2015, Usoro said, “Equinor has a strong footprint in the U.S. Gulf of Mexico (largely in nonoperated assets), but the company has indicated plans to become a major operator in the region, with growth focused on Paleogene-rich resources.”