EQT Corp. said Thursday it has suspended its deep Utica Shale test program in favor of the Marcellus Shale, as it prepares to bolt-on more acreage in southwest Pennsylvania in a deal to acquire Rice Energy Inc. that’s on track to close by year’s end. 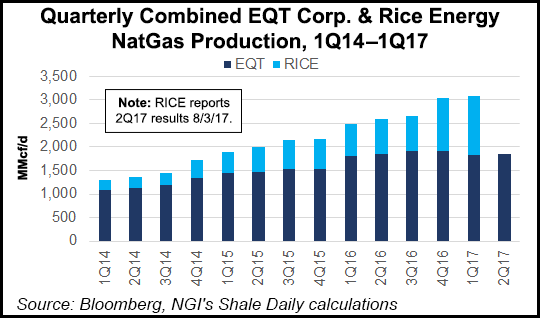 David Schlosser, president of the exploration arm, said more contiguous core acreage in Washington and Greene counties, PA, from Rice would allow EQT to drill longer laterals. “We have multiple years of long lateral inventory in the Marcellus. When comparing the two plays, it is difficult for the Utica to compete,” he said during a call to discuss the second quarter results. “For these reasons, we have chosen to suspend our Utica test program to focus our efforts on Marcellus development as we integrate the assets we’ve acquired over the last year and a half.”

The company began testing the deep Utica about two years ago and has drilled several wells in southwest Pennsylvania and West Virginia. It only had plans to drill seven deep Utica wells in 2017. But the program was expected to account for 18 Bcfe of production this year. Without it, EQT reduced full-year guidance by 10-15 Bcfe to 825-840 Bcfe. Capital from the Utica program mostly would be redirected to finishing drilled but uncompleted wells.

Even so, with seven completion crews expected to be in the field for the remainder of the year, the company plans to turn-in-line another 113 wells, or about three times more than it did during the first six months of the year, putting it on track to exit 2017 with a strong finish.

It also remains unclear what EQT intends to do with Rice’s acreage in Belmont County, OH, since most of the acquisition synergies are focused on Pennsylvania. EQT abandoned its Ohio Utica acreage in 2014 and hasn’t looked back.

CEO Steven Schlotterbeck said the company recently received antitrust clearance for the acquisition from the Federal Trade Commission. He also addressed shareholder concerns that the deal would do more to compound the company’s failure to realize more value for its businesses. Earlier this month, investor Jana Partners LLC wrote EQT’s board of directors to urge the Rice deal be scrapped in favor of splitting the upstream and midstream businesses.

“We will develop a plan by the end of 2018 that we believe is in the best interest of EQT and all shareholders,” Schlotterbeck said. “These options could include splitting the companies, selling one of the businesses” or even collapsing EQT Midstream Partners LP into its general partner to support a buy-back program.

EQT estimated that it can reasonably achieve $2.5 billion in cost synergies by acquiring Rice, mainly through drilling longer laterals, prioritizing drilling and lowering surface costs for things like roads, pads and water pits.