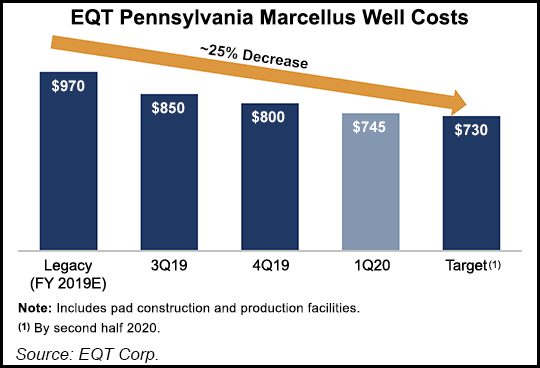 Rice said the company is largely immune from the historic drop in crude prices because “the vast majority of our production is natural gas and less than 5% of our production is tied to deteriorating liquids and oil prices.” EQT produced well above the midpoint of guidance in the first quarter and spent less doing it in what Rice said is a sign that the company is strengthening since he took over last year.

Like other Appalachian producers, EQT expects demand and prices to remain weak in 2020. Demand has declined by 4-6 Bcf/d so far this year across the industrial, power, residential and commercial sectors in response to the Covid-19 pandemic, Rice noted. Liquefied natural gas exports are also falling as global gas prices remain weak, he said. However, as more oil producers respond to falling prices by shutting in wells and with it, reducing associated gas production, EQT is positioning for a long-awaited rebound in prices next year.

“The challenge will be trying to balance the timing of demand recovery and anticipate the new normal for demand,” Rice said. “We can see prices having the potential to spike in certain peak demand periods that could result in some demand destruction or fuel switching.”

Volatility might not be a bad thing for EQT, Rice noted, pointing to the severe winter weather and brutal cold of 2014 and 2018 that sent demand soaring and spot prices skyrocketing in some parts of the country. He said EQT could shift some of this year’s production into 2021 to capitalize on better prices, but the guidance remains unchanged.

CFO David Khani said the company is also carefully studying shifts in the broader market to ensure “highly informed strategic hedging decisions.” For now, the company is sticking with its plan to produce 1.45-1.50 Tcfe this year on a capital budget of $1.075-1.175 billion. Management may update plans and provide more details on 2021 in the coming months.

EQT produced 385 Bcfe, or 4.2 Bcfe/d in the first quarter, 20% above guidance and compared with 383 Bcfe in 1Q2019. Capital expenditures were reduced in March by $75 million after pulling back activity in Ohio’s Utica Shale.

Measures implemented since the management team took over last year also led to reductions in well costs in the core Pennsylvania Marcellus Shale acreage. Wells costs came at $745/foot, down 7% from 4Q2019 and closing in on a target of $730.

The company is also in “advanced discussions” to divest noncore assets for $125 million as part of a broader effort to cut debt and sell up to $1.5 billion in assets. Before the pandemic, EQT had also been marketing its core Utica assets in Ohio. Rice said Thursday some sales are on hold. The program is now more about trimming “the rosebush” considering some assets will be worth more later when commodities rebound.

EQT reported a first quarter net loss of $167 million (minus 65 cents/share), compared with net income of $191 million (75 cents) in the year-ago period. The loss stemmed partly from decreased operating revenues as prices declined, a rise in impairments and the expiration of leases.