EQT Corp. and a unit of NextEra Energy Inc. are offering capacity on a new pipeline project from the Marcellus and Utica shales to interconnecting pipelines that serve the Southeast. The 330-mile project is called Mountain Valley Pipeline. 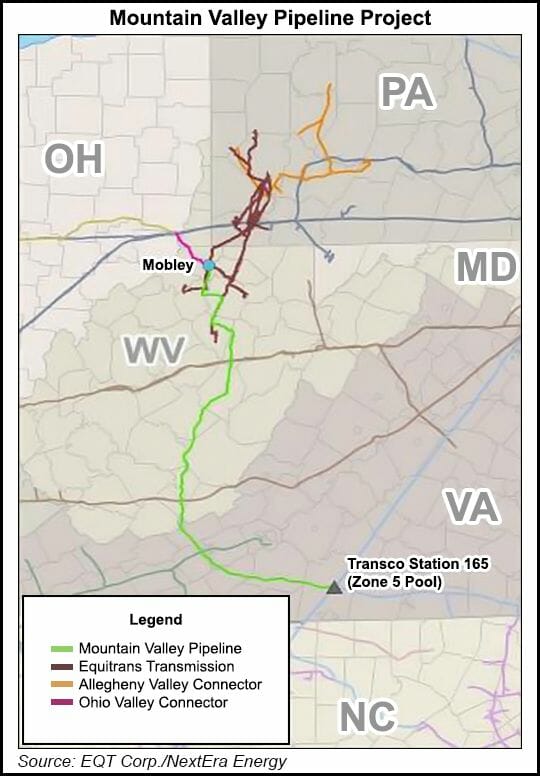 The Ohio Valley Connector would extend the Equitrans transmission system from West Virginia to Clarington, OH, and connect with the Rockies Express pipeline and the Texas Eastern pipeline. The estimated in-service date is during the second quarter of 2016.

“Transco Zone 5 is a highly liquid trading area that begins at the South Carolina-Georgia border and ends at the Maryland-Virginia border just northeast of Station 185, with deliveries into the North Carolina lateral that merges with the mainline at Station 165 as well as deliveries to Cove Point LNG,” the companies said in their open season documents.

EQT Corp.’s Blue Jenkins, executive vice president for commercial, told NGI’s Shale Daily that Transco’s Zone 5 is mainly driven by power generators and local distribution companies. With coal-fired power plant retirements on the way in the coming years, the gas-fueled generation profile is going to increase in the region, he said.

“As we look at the power generation that has been slotted for retirement and then the new gen that will be built to replace that, it’s fairly significant over the next several years,” Jenkins said. “This pipeline comes on in late 2018, so we look at not only what comes on between now and then, but of course what will come on during the term of this pipeline.”

It’s too soon to tell whether the project is “producer push” or “market pull,” Jenkins said. “I expect we’ll have participation on both sides and have had conversations already…with responses on both sides. I expect it will be a mix.”

In addition to the primary delivery point, the Mountain Valley Pipeline has numerous potential interconnects with pipelines and processing facilities. Shippers will have the option to request a project extension to delivery points farther south into North Carolina. The pipeline is expected to initially provide at least 2 Bcf/d of firm capacity.

EQT and NextEra US Gas Assets LLC are forming a joint venture (JV) to construct and own the Mountain Valley Pipeline. EQT is expected — through one or more of its affiliates, including EQT Midstream Partners LP — to operate the pipeline and own a majority interest in the JV.

Including EQT, the open season has commitments from two foundation shippers that, combined, have agreed to 1 Bcf/d of firm capacity through 20-year contracts. Delivery to Transco station 165 is expected to be in service by the fourth quarter of 2018.

“This is an exciting opportunity to invest in a high-quality natural gas pipeline that we expect to be fully contracted for the next 20 years,” said T.J. Tuscai, president of NextEra US Gas Assets. “This project is expected to support production growth and physical takeaway capability in the Marcellus and Utica and provide new markets to producers and shippers in the region. In addition, customers in the southeast United States should benefit from a new reliable supply source.”

Last month, Dominion Resources Inc. began talking about a preliminary idea to pipe Marcellus/Utica shale gas from West Virginia, through Virginia to southern North Carolina via a pipeline that would be called the Dominion Southeast Reliability Project (see Shale Daily, May 28). If the company decides to construct the pipeline, it could be in service as early as the end of 2018. Southeast Reliability would interconnect with Dominion Transmission in Harrison County, WV, and run through Virginia to Lumberton, NC.

And Spectra Energy is in the preliminary stages of building a 427-mile, 36-inch diameter pipeline, with capacity of up to 1.1 Bcf/d, that would run from the heart of the Marcellus to North Carolina. The tentative in-service date is some time in late 2018 (see Shale Daily, May 20).

“I think at a high level you would say they are competing projects,” Jenkins said of the Dominion and Spectra plans. “I think we would highlight for our project the connectivity to our system and the amount of supply access that we have on Equitrans and of course the surrounding area…I would say they are competitors, but I think as we look across those projects, obviously we feel strongly about the competitive advantages we think we bring to both the producer side of the equation with their ability to access this project coming off of Equitrans, as well as the market access based on where we hit Transco Zone 5. We think ours is very competitively advantaged.”