The oilfield services (OFS) market could lose as much as $340 billion total for the value of purchases over the next eight years, particularly in unconventional plays, as oil and gas investments decline and consumption slows, according to Rystad Energy. 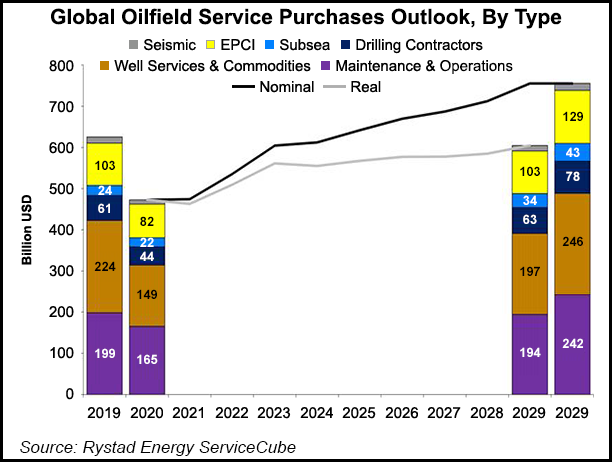 Researchers now expect peak oil demand to “arrive earlier and at a lower level than previously thought,” which may lead to reduced spending by exploration and production (E&P) companies.

Covid-19’s impact on the energy market, along with the accelerating energy transition, led Rystad in November to revise its peak oil demand forecast.

“With a lower need and willingness among E&P companies to invest in oil and gas, capital expenditure across offshore, shale and conventional onshore resources will probably struggle to get back to 2019 levels,“ said Rystad’s Audun Martinsen, head of Energy Service Research.

OFS purchases are expected to decline to $473 billion this year from $625 billion in 2019. E&P spend is forecast to remain flat in 2021 before beginning a slow recovery.

“Based on our updated peak oil demand forecast, we now see OFS purchases returning to pre-pandemic levels only after 2024 in nominal terms, reaching $642 billion in 2025,” researchers said. “In real terms, excluding the impact of price inflation, annual purchases are not expected to revisit pre-pandemic levels this decade.”

The estimated decline in the value of purchases is spread across the next eight years and “calculated as the cumulative difference between the current and the previous outlook for peak oil demand, which corresponds to a 6% drop,” according to Rystad.

Most of the downward revision is likely to be driven by investments in shale and tight resource investments, which previously were expected to grow by 45% in 2022. Unconventional investments now are pegged at about 30% growth.

“Shale operators have been hit hard of late, and they also harbor ambitions to generate better cash flow by reducing their investment ratio,” researchers noted.

“In nominal terms, offshore investment levels are projected to return to 2019 levels in 2023, with conventional onshore following suit in 2025 and shale in 2028.” In real terms, though, upstream investments “may never make it back to 2019 levels,” Martinsen said.

The OFS market is now estimated to grow at a compound annual rate of 7.9% from 2020 to 2025, compared with a previous forecast of 10.4%. The biggest revision to purchases is in the EPCI sector, aka the engineering, procurement, construction and installation segments.

Lower project sanctioning activity, said researchers, “has had a negative impact, but segments related to wells have also suffered due to the slowdown in the shale sector.”