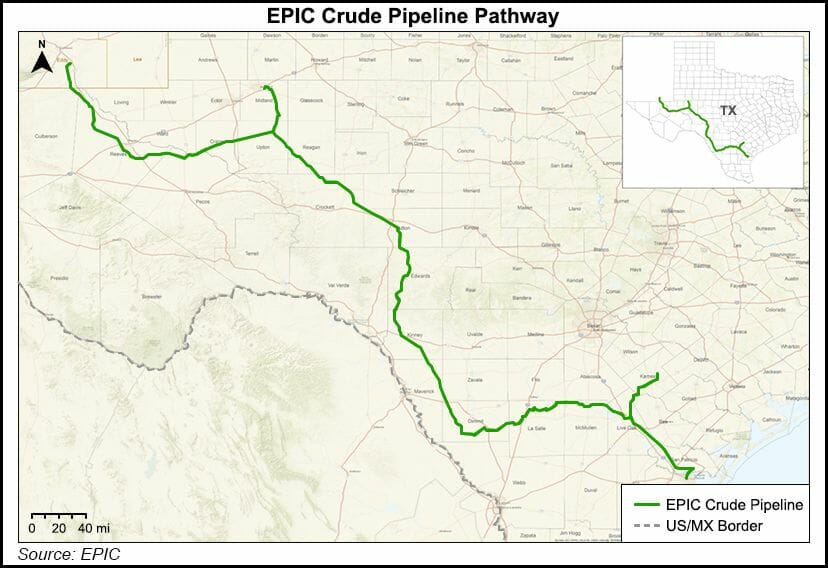 The pipeline extends from Orla, TX, to the Port of Corpus Christi, TX, transporting crude from the Permian’s Midland and Delaware sub-basins, as well as the Eagle Ford Shale.

As a result, Epic has ceased interim crude oil deliveries on the parallel 24-inch diameter Epic Y-Grade natural gas liquids (NGL) pipeline, which had been transporting crude since August while the 30-inch pipeline was under construction. The company indicated it has begun the cleanout process and transition of the Y-Grade pipeline back to NGL service.

The pipeline commissioning comes at a time of uncertainty for chastened Lower 48 exploration and production companies that are prioritizing returns and cash flow over production in an effort to appease increasingly impatient investors.

In a two-part series of research notes published in November and December 2019, RBN Energy analyst John Zanner warned of a “potential overbuild facing Permian takeaway pipelines being developed to serve the Gulf Coast market,” given that many upstream operators in Texas have slashed capital expenditure (capex) and production guidance in 2020.

Overbuild or no, Epic CEO Phil Mezey said Wednesday, “Epic’s ability to provide crude oil transport out of the Permian Basin and into the Corpus Christi market highlights the strategic value of our assets.”

Also in the second half of this year, Epic’s East Dock on the Corpus Christi Ship Channel is scheduled to enter service. The East Dock would be able to load Suezmax oil tankers, which can transport up to 1 million bbl, at a maximum rate of 40,000 b/hour.