A few North American exploration and production (E&P) operators sneaked in third quarter results over the past few days, but most of the rest will begin their conference calls in the next couple of weeks, offering a broader look at the market and whether natural gas prices — and drilling — could rebound in 2014. 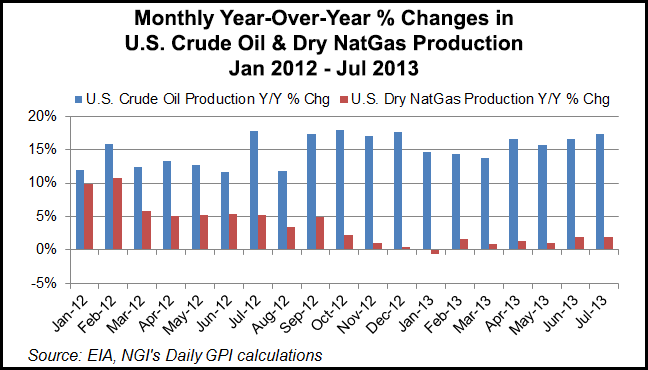 Energy analysts will be looking for several things, most notably how the more efficient drilling techniques are contributing to the bottom line.

“While we expect the focus in most basins will remain on improved manufacturing techniques, we should also have some important well results coming out of a couple plays, most notably the Permian, as a number of formations in the play are being tested with horizontal drilling,” said Wells Fargo analyst David Tameron. The Permian Basin “has had a tremendous run over the last several months and should be interesting to see if momentum can continue.”

Wells Fargo analysts will be focused on several items in the E&P conference calls.

Oil “feels better than gas,” with Wall Street biased toward oil-exposed rather than natural gas names, said Tameron. “As for natural gas, most natural gas price estimates are either flat or downward trending. In addition, given all the bottleneck and infrastructure issues, gauging or predicting the Marcellus differential (where most clients have some portion of their gas exposure) and actual company realizations will be very difficult.

“Further, the gas market has in some sense become a ‘just-in-time’ model, with producers opening up already connected wells when gas prices hit a specific bogey, thus capping regional prices as waves of supply come online.

“A floor is also naturally created, as producers will only sell at a certain minimum price. Thus, not surprisingly, gas can be viewed as rather range-bound over the near/medium term.”

Monthly crude oil production in the United States has been increasing for some time, with production in July up 17.3% compared to July 2013, according to Energy Information Administration data. Dry natural gas production, on the other hand, has been nearly flat, increasing less than 2% compared to the same month a year ago for nine consecutive months (November 2012-July 2013).

The impact of pricing pressures in the Marcellus Shale for the first time should be quantified in 3Q2013 results, given some meaningful discounts to Henry Hub on several pipeline delivery points in the region that took place during the period, said Tameron.

“Average bidweek Appalachia prices traded at a 6% discount to Henry Hub over the quarter (versus a 9% premium on average since Jan. 1, 2010), though various points traded significantly lower over the quarter.”

The problem, he said, “appears to be most acute along Dominion South, [Transcontinental Gas Pipe Line (Transco)] Leidy and Tennessee Gas 300, where there have been pricing discounts of 40 cents-$2.00/Mcf. The duration of these discounts remains to be seen in our view, as weather and pace of infrastructure buildout will both have meaningful impact in the face of production that does not appear to be slowing.”

Each of the operators has a different exposure, given midstream and takeaway contracts in place, as well as hedges in place. “From our conversations, it generally appears that 2014 will be challenged with the bulk of major infrastructure projects slated to come online later in 2014 early 2015,” said the Wells Fargo analyst. “But cold weather has a way of making an impact should unseasonably cold temperatures be felt through the Northeast this winter.”

The “next buzz word” for E&Ps is optimization.

There also likely will be a lot of talk around the size of hydraulic fracturing jobs, the placement of jobs, hybrid/slickwater and conceptual designs.

“On the Midland side of the Permian, more exploration results from the Northern Midland Basin should create excitement as the play moves north, while in the Southern Delaware Basin we are expecting news from Reeves, Loving, Ward and Culberson counties on the Wolfcamp Shale” in Texas, Haas said.

“In the Wattenberg Field/Niobrara, the DCP LaSalle Plant is up and running; this should help ease line pressure for the entire region while downspacing, stacked pay and extended reach lateral results could energize investors further. In the Ohio Utica-Point Pleasant trend, we expect test results from the core counties and solid data points from Washington County [PA] defining the southern limit of the play. We feel these catalysts should help drive names with exposure to these plays nicely higher.”

Wells Fargo analysts recently have been fielding a lot of “bigger-picture questions” about the E&P group at large,” and analysts are entering the earnings season “more cautious than constructive due to the recent/rapid rise in share prices.”

For Wells Fargo, the “biggest question right now in our minds, and a question we have received with increasing intensity in recent weeks, is when does this long only money stop flowing in? To that, we have heard the same chatter as everyone else, that it could last for a few more weeks or could last through year-end. We admit to flying somewhat blind, but these cycles always seem to take longer than expected, and our gut feel is we still have at least another month or so.”

The E&P sector has “been on fire,” and over the past two months, “share prices have soared in the E&P space,” said Haas.