Attorneys active in the oil and gas industry warn that a pair of bankruptcy court cases involving distressed exploration and production (E&P) companies could spell trouble for the midstream sector, with the potential for more E&Ps using bankruptcy protection as a means to get out of long-term contracts. 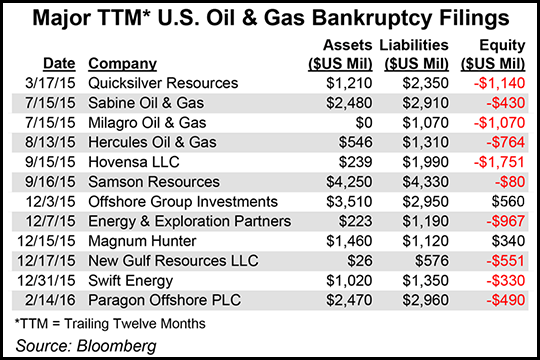 Meanwhile, midstream executives have been trying to minimize concern that their contracts with troubled E&Ps are leaving their companies vulnerable.

In the Sabine case [No. 15-11835-SCC], court records show that the Houston-based E&P has asked for permission to reject the natural gas and condensate gathering agreements it signed in 2014 with Nordheim Eagle Ford Gathering LLC, a subsidiary of Cheniere Energy Inc. The agreements cover all of Sabine’s natural gas interests in a geographic area of DeWitt County, TX.

Sabine’s attorneys argue that cancelling the Nordheim and HPIP contracts could save as much as $115 million. “Services agreements such as these, that place burdensome obligations on a debtor in bankruptcy, are precisely the type of agreements that debtors are meant to be able to reject in the exercise of their business judgment when the market no longer supports the rates or values committed to in the contracts,” the attorneys told Judge Shelley Chapman in a filing last October.

But the midstream companies countered that the agreements cannot be rejected because they are covenants that run with the land under Texas law.

“Rejection of the gathering agreements will not relieve Sabine or its successors of the terms of the gathering agreements, and rejection will therefore provide no benefit to the estates,” attorneys for Nordheim said in a separate filing last October. “In fact, rejection may result in a detriment to the estates in the form of duplicative payment obligations to the extent that Sabine follows through with its stated intention to contract with an alternative gatherer while exclusively obligated to Nordheim.”

The Sabine case resumes on March 3.

Meanwhile, in the Quicksilver case [No. 15-10585], attorneys for the Fort Worth, TX-based company filed a motion on Feb. 5 asking a judge to terminate its gathering and processing contracts with Crestwood Midstream Partners LP. The contracts expire in 2020. According to court documents, Quicksilver argued cancellation of the contracts is necessary for the court-approved sale of some of its assets — to BlueStone Natural Resources II LLC, for $245 million (see Shale Daily,Jan. 25) — to move forward. The next hearing date is March 4.

“If a final order is not entered, to the detriment of the debtors’ estates and creditors, BlueStone may elect to terminate the $245 million all-cash transaction,” Quicksilver’s attorneys told Judge Laurie Silverstein. “In that event, the debtors would likely proceed with the backup bid submitted by Barnett Shale Gas LLC, which includes a large credit big component ($157 million) and carries, in the debtors’ business judgment, additional execution risk.”

“There is going to be a domino effect in this industry. If the oil and gas producers go down, they’re going to take a lot of other industries down with it,” Heidi Sorvino, an oil and gas industry attorney with the New York City office of LeClairRyan, said Monday. She added that since producers are allowed to have their contracts rejected under Section 365 of the U.S. Bankruptcy Code, pipeline companies may have little recourse other than to put in an administrative claim.

Jeff Nichols, chairman of the energy finance practice group at Haynes and Boone LLP in Houston, said there is the potential that E&Ps cancelling contracts could become a big issue for midstream companies, but at the moment the outlook was unclear.

“You have to look at it on a contract-by-contract basis,” Nichols said Monday. “State laws also differ, and then there’s also the issue of economics.”

Using Chesapeake Energy Corp.’s contract with Williams as an example, Nichols said “if the contract itself is pretty close to market already, or if the producer doesn’t really have an alternative to get his gas to market, then there’s not as much exposure to the midstream company. That’s because, if the bankruptcy court rejects [a midstream contract], they have to go back to the midstream company and negotiate another contract, and the new contract may look similar to the old one.”

Conversely, there is the Sabine case. “But in some cases the producer may have alternatives, and so it’s very beneficial for the producer — who’s locked into something that’s uneconomic — then it may be a big win for the E&P company and a big loss for the midstream company.

“Ultimately, Texas courts may rule further on this issue. It’s not a very well developed area of law, and there are different lines of case law that would suggest different results. It will be an interesting issue as it unfolds.”

Last month, Kinder Morgan Inc. reported disappointing earnings for 4Q2015 and the full-year 2015, and reduced its growth capital budget for 2016 (see Daily GPI, Jan. 21). CEO Steve Kean said the company is continuing “to closely monitor our counterparty exposure. However, we are a diverse company with operations across a broad set of industries and we have a large customer base with only a few customers that account for more than 1% of our annual revenues. Additionally, the great majority of our largest customers remain solidly investment grade.”

Plains All American Pipeline LP also reported disappointing earnings for 4Q2015, and placed some of the blame on E&Ps not meeting the minimum volume commitments in their contracts (see Shale Daily, Feb. 11).

Williams CEO Alan Armstrong told analysts last Thursday that the company is aware of the credit risk facing producers, including Chesapeake, although he pointed out that the producer has been paying its bills (see Daily GPI, Feb. 18). But Armstrong added that even if Chesapeake wanted to reject its contracts, the E&P has few options because Williams’ gathering lines are physically connected to Chesapeake’s wellheads and pads.

Although Occidental Petroleum Corp. has not formed a master limited partnership (MLP) — a popular option the midstream sector used to generate capital when oil prices were high — CEO Stephen Chazen reportedly told attendees of the IHS CERAWeek conference in Houston on Monday that MLPs are also exposed to the danger from E&P bankruptcies.

“If you think debt is bad in the production business, the midstream has a lot more relatively,” Chazen said, according to Reuters. “[MLPs] were counting on growth in production that for now is not there. So that’s really a major issue for the midstream — trying to deal with way too much debt given the [dividend] promises made to limited holders…

“They’re going to have to do something…the debt is just not going to be there to roll over at a reasonable price.”

In another sign of just how widespread the potential danger is, Deloitte LLP reported last week that more than one-third of the global pure-play operators — which include an estimated 175 E&Ps — are at risk of falling into bankruptcy this year (see Daily GPI, Feb. 16).