Houston-based EOG Resources Inc. began shutting in some oil production in March, with plans to curtail output through at least June as it waits out the downturn in demand and pricing caused in part by Covid-19. 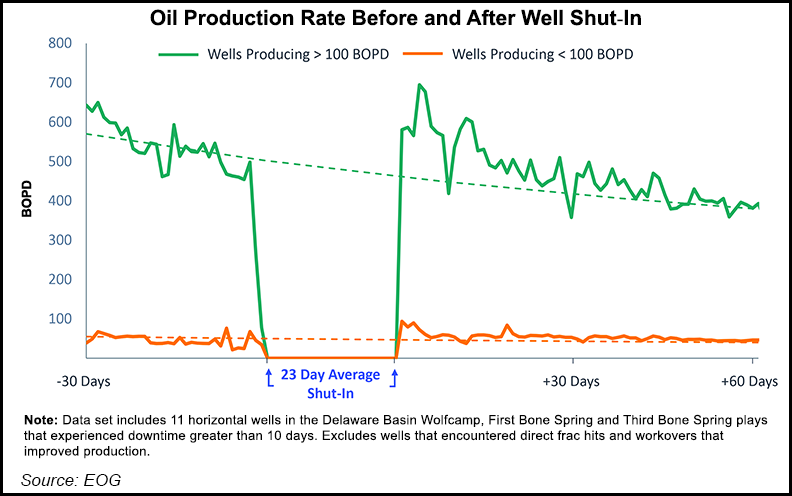 The super independent, which works in the Lower 48, Trinidad and China, issued its results late Thursday and held a conference call to discuss quarterly results on Friday led by CEO Bill Thomas.

“This is an unprecedented downturn,” he said. “U.S. oil production is in severe decline, and it could take years for domestic production to turn around. We believe that the historic and prolific oil production growth by U.S. shale may have been forever altered.

“While the timing and level remains uncertain, we are confident demand will improve…Current prices are not sustainable.”

EOG’s large inventory of drilled but uncompleted wells, or DUCs, could be brought online as soon as the last half of the year, providing momentum heading into 2021, Thomas said.

However, for now, rates of return are the guide.

In addition, the operated rig count over the last six weeks has been sharply cut, down to eight from 36. Only six rigs are expected to be running for the remainder of the year.

Turning wells online also has been halted — until the end of June. About 300 DUCs should be ready to complete in the second half of the year, with fourth quarter production forecast to average about 420,000 b/d.

“Our 2020 production profile reflects a rate-of-return decision, even though 90% of our

shut-in production is cash flow positive at $10/bbl,” COO Billy Helms said. The DUCs are “simply waiting to produce. This allows us to exert more control over the cash margins of every barrel we produce and provides us the ability to quickly increase oil volumes into an improving oil price environment.”

If demand and pricing were to continue to slump, EOG stands ready to cut more spending and defer output longer, Helms said.

EOG has more than 4,500 net drilling locations that are capable of generating rates of return at less than $30/bbl West Texas Intermediate (WTI). It is those locations where the work this year is to be focused, he said.

“To be clear, we would rather shut-in production than sell into an uncertain low price market. Ultimately, the decision to begin increasing production will be based on a more sustainable and constructive outlook for oil prices in the second half of the year for all that we do choose to sell.”

EOG, has secured favorable oil prices through “various contracts that provide exposure to Brent, Gulf Coast, WTI and fixed prices,” Helms said. “The marketing strategy provides flexibility to pivot each of our producing areas to multiple markets to capture the highest margin.”

EOG, which initially reacted to the pandemic by cutting capital expenditures by 31% in March, has again reduced spend, now set at $3.3-3.7 billion, down another $1 billion and off 46% overall from the original plan.

Efficiencies also are improving, with targeted well costs forecast to decline by an average of 8% from 2019 levels, including by 9% in the Permian Basin’s Delaware sub-basin and 7% in the Eagle Ford Shale in South Texas.

The revised capital plan is targeting 2020 crude production of 390,000 b/d, representing a decline year/year of 15%. EOG currently plans to bring 485 net wells to sales for the year, compared with the original forecast of 800 net wells. The focus is to be in the Permian Delaware and Eagle Ford.

“Our guiding principles in this environment remain consistent with EOG’s long-term strategy: to make returns-based decisions and spend within our means to protect our strong balance sheet,” Thomas said. “This is intended to preserve EOG’s business value and position the company to thrive in an upturn.”

Despite the cutbacks, oil production volumes in 1Q2020 were in line with the target range while capital expenditures fell 14% below the target midpoint. Total crude volumes of 483,300 b/d grew 11% year/year, despite the delay in starting up some wells and shutting in 8,000 b/d in March.

Natural gas liquids production increased 35% from a year ago, supported by the increased recovery of ethane in processing operations. Natural gas volumes grew 5%, contributing to total daily production growth of 13%.

Net income in 1Q2020 was $10 million (2 cents/share), compared with year-ago profits of $635 million ($1.10). Cash operating expenses declined from a year ago by 8% on a per-unit basis. Net cash provided by operating activities was $2.6 billion, with $1.7 billion generated in cash flow.

At the end of March total debt outstanding was $5.2 billion for a debt-to-total capitalization ratio of 20%. EOG had $2.9 billion of cash on the balance sheet at the end of the first quarter.