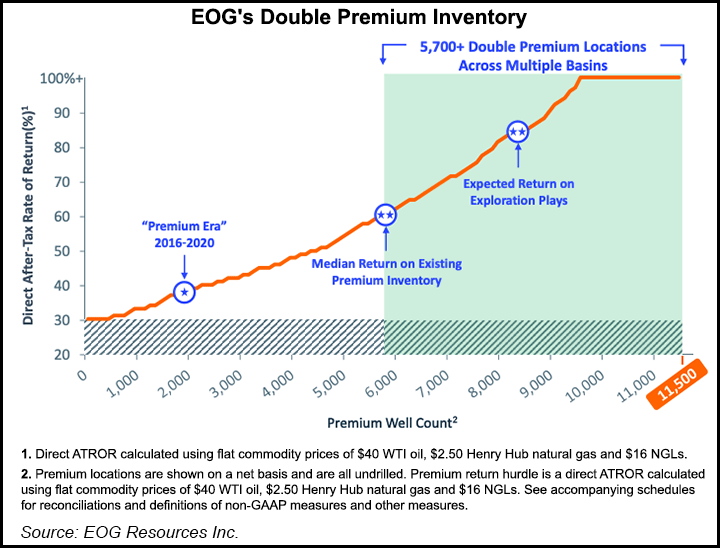 The Houston-based independent plans to maintain production at around 440,000 b/d until demand has recovered to above pre-Covid levels and U.S. crude inventories are below the five-year average, CEO Bill Thomas told analysts during the call last Friday. EOG also is “looking for spare capacity to be certainly a lot lower than it is right now.”

“The inventories are dropping,” Helms said, adding, “we think…there will be fairly consistent draws on inventory from here on out, especially during the summer pickup activity.”

EOG is fresh off a record first quarter in which it generated $1.07 billion of free cash flow (FCF), an all-time quarterly high, compared with minus $19 million in the year-ago period. The company declared a special dividend of $1.00/share on top of its regular quarterly dividend of 41.25 cents/share, which is expected to translate to total cash return to shareholders of $1.5 billion for 2021.

The special dividend and positive results “reflect the power of EOG’s returns-focused strategy,” Thomas said. He added, “our employees have embraced the higher hurdle rate with the shift to double-premium, which drove record returns in the first quarter.”

Under EOG’s double-premium mandate, all wells must produce a 60% after tax real rate of return (ATROR) at prices of $40/bbl West Texas Intermediate (WTI) oil and $2.50/Mcf Henry Hub natural gas. This is twice the 30% ATROR established by EOG in 2016 after the previous market downturn.

Under the double-premium strategy, EOG would only require a $50/bbl WTI price to generate a 10% return on invested capital, management said.

President Ezra Yacob said, “the oil price does not guide how much we’re going to grow. It’s the market fundamentals.”

The company plans to complete around 500 net wells, focused mainly on the Permian Basin’s Delaware formation, the Eagle Ford Shale and the Powder River Basin.

EOG has drilled 17 wells to date to delineate Dorado, which the company said is “highly competitive” with the rest of its premium inventory.

Capital expenditures (capex) of $945 million were below the guidance midpoint during the first three months of 2021, “driven by sustainable efficiency improvements,” and down from $1.69 billion in 1Q2020. “Faster drilling times, more efficient completion operations and lower-cost sand and water sourcing contributed to lower overall well costs,” management said.

Oil and condensate production averaged 431,000 boe/d, above the midpoint of guidance, but down from 483,300 boe/d in 1Q2020. Downtime related to Winter Storm Uri in February dented output by about 3%, the company said.

NGL output was down 12% sequentially, “driven by the market-based decision to reduce ethane extraction,” management said.

Total per-unit costs in the quarter were slightly above the midpoint of guidance because of higher fuel and power prices during Uri, EOG said.

“EOG also realized higher prices for a portion of natural gas sold on a spot basis during periods of strong demand related to winter storms and for natural gas sold at prices tied to” liquefied natural gas export markets. However, “Price gains were partially offset by a decrease in hedge settlement value, to $30 million cash paid in the first quarter from $72 million cash received in the fourth quarter.”

EOG also reached an agreement to divest all of its assets in China, which currently produce about 25 MMcf/d natural gas net, for $140 million. The deal is expected to close by the end of June.