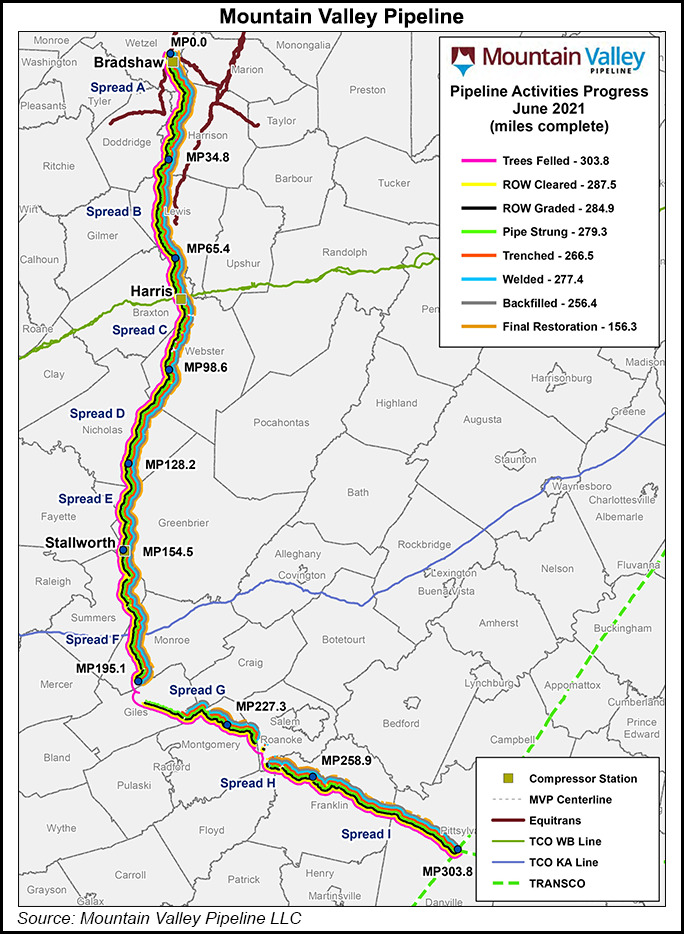 The pipeline would move Appalachian natural gas to the southeast via a 303-mile route through West Virginia and Virginia.

The Sierra Club and other environmental organizations filed the lawsuit against the West Virginia Department of Environmental Protection’s WQC issued under Section 401 of the federal Clean Water Act (CWA).

The WQC is a major stepping stone toward fulfilling a revamped permitting and construction plan laid out by MVP in early 2021 as an alternative to previous waterbody crossing authorizations that were stalled by legal challenges. Virginia issued a similarly pivotal WQC under the new plan last month, but groups are challenging that authorization as well.

The lack of waterbody crossing authorizations has been a major contributor to the project’s delays. The state-issued certifications would allow the U.S. Army Corps of Engineers to move forward with pending CWA Section 404 authorization.

MVP said Tuesday it continues to target an in-service date for this summer. Work on the project is nearly 94% complete, including 55% of the right-of-way that has been fully restored.

“While we cannot comment on the details of pending litigation, or the obvious agenda espoused by the opposition, we believe agency regulators in Virginia and West Virginia performed a comprehensive analysis and thorough review of Mountain Valley’s 401 permit applications, satisfied all legal requirements, and made appropriate authorizations under the law,” MVP spokesperson Natalie Cox told NGI.

“Under stringent oversight by state and federal regulators, we are proud to design and develop MVP in a way that protects natural resources, and we remain committed to the safe, responsible completion and operation of this critical infrastructure project that will meet public demand for reliable, affordable, and lower-carbon energy,” she added.

Two other cases are pending in the U.S. Court of Appeals for the Fourth Circuit challenging the pipeline’s Endangered Species Act approvals and those from the U.S. Forest Service.

Last August, MVP drew closer to realizing its revised water-crossing plan when it received an environmental assessment from the Federal Energy Regulatory Commission (FERC). FERC originally issued a certificate to the pipeline in a split decision in 2017, but myriad regulatory snags and legal setbacks have driven delays and cost overruns in the intervening years.