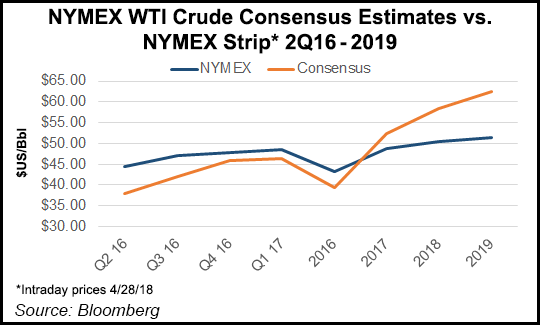 During a conference call, Jim Teague, CEO of Enterprise’s general partner, told analysts his outlook on prices “is probably worth what you’re paying for it,” and then he made his case for optimism.

“Almost all the experts have been saying that we’ve seen the bottom for oil prices and that prices in general should be on an upward move,” Teague said. “We believe the fundamentals point in that direction.”

U.S. producers and those elsewhere will see declining output as a consequence of their response to lower prices. Meanwhile, “economists are predicting a 1 to 1.5 million b/d increase in global [oil] demand for 2016, and that’s on top of last year’s 1.6 million b/d demand growth,” Teague said.

One of the warmest winters on record hasn’t helped natural gas prices, Teague allowed. But “step changes in demand are coming.”

From now until 2020, new U.S. LNG export capacity will be steadily entering service, he said. Meanwhile, demand for gas among power generators continues to increase, and industrial load continues to grow, “…all in the face of gas rig counts that are less than 90 in the U.S., considerably past any historic lows [see Daily GPI, April 22].

“For liquids, NGL prices are influenced by oil, and with ample export capacity, ample shipping and a wave of new ethylene plants coming online, we don’t see that changing. Said simply, if you’re bullish oil, you have to be at least as bullish on natural gas liquids. Thus, the fundamentals for oil, natural gas and all the NGL products look constructive. Hydrocarbon demand continues to grow; production continues to fall, which points to improved pricing.”

“Our results were driven by increases in gross operating margin attributable to record NGL pipeline and LPG export volumes, the EFS Midstream acquisition, and newly constructed assets that largely offset lower earnings from our commodity- and spread-sensitive businesses, the sale of our offshore business and lower volumes on certain crude oil and natural gas pipelines,” Teague said. “Overall, total onshore liquid pipeline and marine terminal volumes increased 12% to a record 6.5 million b/d in the first quarter of 2016 compared to the same quarter of last year.”

Adjusted earnings were $1.33 billion, in line with a Jefferies forecast for the same and a Street estimate of $1.32 billion.