Enterprise Products Partners LP’s proposed 2 million b/d oil export terminal, to be sited offshore Texas, is inching forward after federal approval was given to apply for a permit. 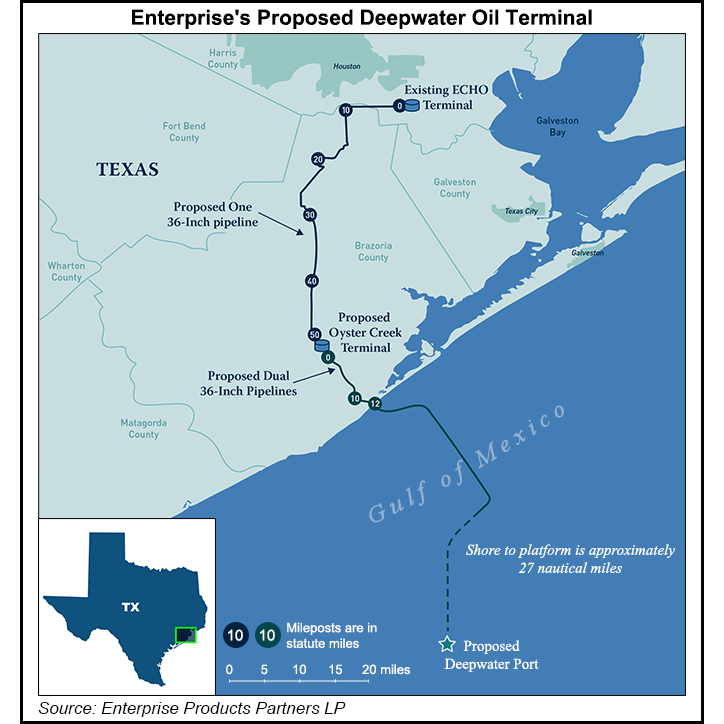 The Maritime Administration (MARAD) in its 94-page Record of Decision said before a license is issued and construction begins on the Sea Port Oil Terminal, aka SPOT, the project “must comply with state and federal permitting, mitigation and related requirements” (2019-0011-7890).

A final investment decision to move forward on the deepwater project was issued by Enterprise in July 2019 after clinching a long-term supply agreement with Chevron U.S.A. Inc.

According to the Securities and Exchange Commission Form 10-Q filed by Enterprise for 3Q2019, the project would consist of onshore and offshore facilities, including a fixed platform about 30 nautical miles off the coast of Brazoria County in 115 feet of water.

“SPOT is designed to load very large crude carriers…at rates of approximately 85,000 bbl an hour,” Enterprise stated in the 10-Q. “SPOT would provide customers with an integrated export solution that leverages our extensive supply, storage and distribution network along the Gulf Coast, with access to approximately 6 million bbl of crude oil supply and more than 300 million bbl of storage.”

Enterprise stated that U.S. crude oil exports were forecast to increase to more than 8 million b/d by 2025, “as production from domestic shale basins continues to increase. SPOT would initially provide up to 2 million b/d of this capacity and be essential to balancing the market and meeting global demand for U.S. crude oil production.”

According to Enterprise, construction of the proposed terminal could begin by the middle of 2023, subject to obtaining the license. Onshore construction could then be completed by the end of 2024, with commissioning in the second half of 2025, MARAD noted.

According to MARAD, construction and installation are expected to support as many as 1,400 temporary jobs, including up to 1,100 during the second year of construction. Further, Enterprise estimated that the workforce would peak at 260 offshore workers and 840 onshore workers, during construction.

The approval to apply for a license came after thousands of area residents and some conservation groups protested the proposal, including the Center for Biological Diversity (CBD). CBD and 289 organizations sent a legal petition to MARAD earlier this month demanding that the Biden administration halt approvals of new deepwater port infrastructure for oil and gas exports.

There are at least six applications pending before MARAD for deepwater oil and natural gas infrastructure. The legal petition said the large role played by the United States in fossil fuel production is the reason to deny permits. “As the world’s largest oil and gas producer, the U.S. must act swiftly to limit warming if we want to avoid truly apocalyptic climate disruption.”