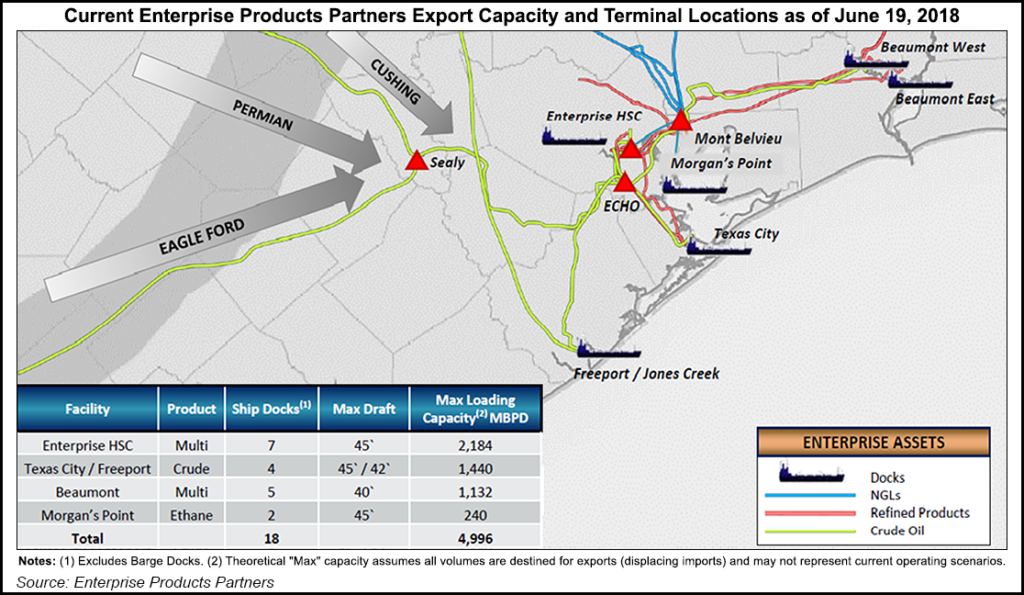 The proposed project as envisioned would be capable of loading very large crude carriers (VLCC) with up to 2 million bbl of capacity. Front-end engineering and design has begun, with initial work underway for permitting.

“Given the long-term outlook for growing supplies of U.S. crude oil production, increasing global demand requiring super tankers, and the future limitations of Gulf Coast port and lightering capacities, we are confident this project will be embraced and supported by both domestic and international customers,” said Enterprise general partner CEO Jim Teague.

No details were provided about where the offshore project would be sited. However, in April Enterprise purchased a 65-acre waterfront site on the Houston Ship Channel (HSC) to serve as the next phase of expansion at an existing terminal, which has two docks, dredging infrastructure and land to expand marine terminaling capabilities. Future plans include constructing at least two deepwater docks capable of accommodating Suezmax vessels, a term used for massive ships (including VLCCs) capable of transiting the Suez Canal.

Based on initial designs, the export project may include about 80 miles of 42-inch diameter pipeline to an offshore terminal capable of loading and exporting crude oil at a rate of about 85,000 bbl per hour.

Enterprise now has a second partial loading underway of the VLCC tanker Eagle Victoria at its jointly owned Seaway marine terminal in Texas City, south of Houston. The tanker is loading about 1.1 million bbl.

“On the heels of our second successful loading of a VLCC at the Texas City terminal, we are now planning to expand our capabilities to load crude oil faster and more cost efficiently without the need for lightering vessels,” Teague said.

Enterprise already has “aggregation capabilities” for exports that include more than 4 million b/d from the Permian Basin, Eagle Ford Shale, Cushing Hub and third-party suppliers.

“Capital and infrastructure to support our project would be solely provided by private capital and would not be reliant nor contingent upon state or federal government agency financial support or infrastructure development,” he added. “We believe this would enable us to deliver this project in a timely manner once permits are granted and the project is underwritten.”

A final investment decision would be subject to receiving the requisite state and federal permits and customer demand.

Construction also is underway east of Houston with Enterprise partner Navigator Holdings Ltd. to build an ethylene export terminal. The 50-50 joint venture is being sited at Enterprise’s Morgan’s Point facility on the HSC with capacity to export up to 2.2 billion pounds/year and refrigerated storage for 66 million pounds. The project should be able to load ethylene at rates of 2.2 million pounds/hour.