Midstream giant Energy Transfer LP said it is continuing work to correct alleged safety violations on its Dakota Access Pipeline (DAPL) after federal regulators warned last week it could face fines if the issues are not resolved. 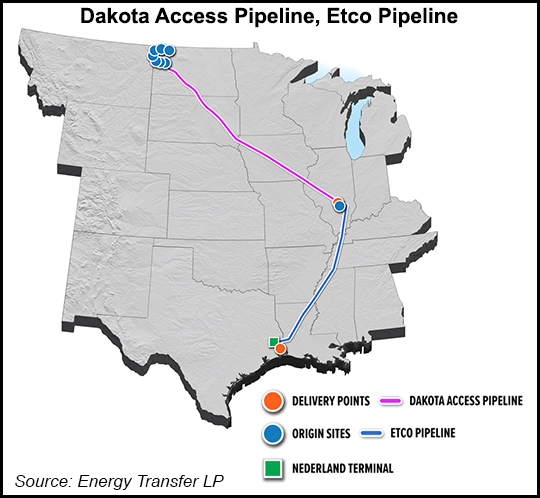 Energy Transfer told NGI’s Shale Daily on Monday that the notice issued last week by the Pipeline and Hazardous Materials Safety Administration (PHMSA) contained the results of a standard audit completed in early 2019. The company said all but one of the listed probable violations have been addressed or are in the process of being addressed.

“DAPL will address shortly the one remaining issue that PHSMA responded to for the first time this week,” an Energy Transfer spokesperson said.

The probable violations range from failing to set pump station equipment to adequately control pressure to underestimating the size of the “mailing buffer” around the pipeline to alert nearby residents of an emergency, according to the PHMSA filing.

The agency recommended that the Dallas-based firm pay a preliminary assessment of $93,200 in civil penalties related to a pair of the items. PHMSA also warned it could face additional enforcement action if two other probable violations were not addressed. In addition, it proposed a compliance order for Energy Transfer to quickly address four of the violations.

The filing marks a stumbling block for DAPL, which has long been a target of environmental and Indigenous groups concerned about the pipeline’s impact. The 30-inch diameter, 570,000 b/d system stretches 1,172 miles. It links with the Energy Transfer Crude Oil Co. (Etco) pipeline in southern Illinois, which in turn flows to the Gulf Coast.

In May, a federal judge ruled DAPL was allowed to continue flowing Bakken Shale oil while the Army Corps of Engineers hashed out a court-ordered environmental impact statement (EIS). In a document filed in court the same day the notice of probable violations was made public, the Corps said it was considering PHMSA’s analysis as part of the EIS process.

The Corps also told the court it was considering requests by the Standing Rock Sioux Tribe and the Cheyenne River Sioux Tribe, which have opposed DAPL, to extend the deadline for the EIS. Standing Rock has proposed a 90-day extension to the March 2022 deadline, while Cheyenne River has requested a six-month extension, to give the Tribes more time to review comments gathered during the scoping process.

“The Corps is seriously considering both requests and may modify the EIS schedule in response to these Tribal requests,” according to the court filing.

Earthjustice attorney Jan Hasselman, who represents the Standing Rock Sioux in litigation against DAPL, repeated previous calls for the Biden administration to shut the pipeline down.

“This is a rogue operator with a history of shoddy operations, and the Biden administration should step in to shut down this pipeline before it’s too late,” said Hasselman, who has represented the Standing Rock tribe in litigation against DAPL for more than five years.