Encana Corp. made the move from natural gas-heavy to liquids-rich generator in the first quarter as new well designs and a sharper focus highlighted the strength of its onshore portfolio. 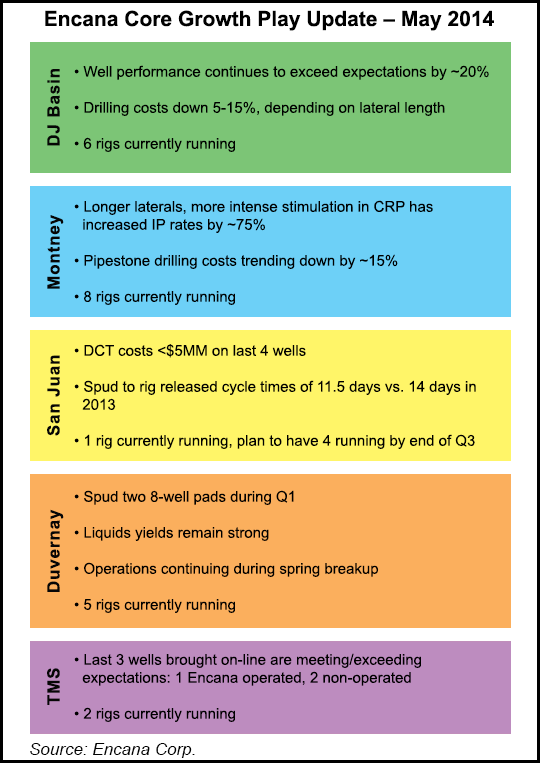 The transition had been a frustratingly slow go for almost three years until former BP plc operating chief Doug Suttles took the wheel last June (see Shale Daily, June 12, 2013). He cleaned house and put long-prized gas properties on the market, promising shareholders that a reduced focus would result in gains. The microstrategy helped Suttles deliver in the first quarter. The winter-fueled spike in natural gas prices didn’t hurt either.

“Our strong first quarter financial and operational results demonstrate that we are making very good progress executing on our strategy and our teams are delivering on virtually all of the targets that we have set to date,” Suttles said during a conference call on Tuesday.

Suttles’ decision to reduce the operations focus to five core plays from Encana’s huge portfolio appears to be on track (see Shale Daily, Nov. 5, 2013). More than 80% of the capital spending between January and March went to the Denver-Julesburg (DJ) and San Juan basins, Canada’s Montney and Duvernay formations, and the Tuscaloosa Marine Shale (TMS).

COO Mike McAllister delighted in delivering the results from the Big Five, particularly new well designs that are producing more and costing less.

In the DJ Basin, where a sixth rig was added, improved operating efficiencies led to a reduction in drilling costs by 5-15%. Long laterals today are averaging $340,000/1,000 feet, versus $410,000. Well performance also is more than 20% above expectations, with current 30-day initial production (IP) rates averaging 330 b/d, McAllister said.

A new well design in the Cutbank Ridge area of the Montney, where eight rigs are running, gave the operator a “more intense stimulation” on its fracture designs, which in turn resulted in increasing IP rates by 75%. In the Montney’s Pipestone area, operating efficiencies sent costs spiraling down by about 15%, with liquids yields from the 12 most recent wells about 20% higher than expected.

Well costs also dropped in San Juan, with the last four wells costing less than $5 million, said the COO. Spud-to-rig release cycle times were cut to 11.5 days from last year’s 14 day average. Only one rig is running today, but plans are to add three more by the end of September.

Encana built two eight-well pads in the Duvernay between January and March. By stockpiling equipment and supplies, the producer was able to run five rigs and continuing construction through the spring breakup.

“Midstream solutions for the play were advanced during the first quarter, with a five-year commitment from Encana and joint venture partner Phoenix Duvernay for transportation on the Alliance Pipeline and a five-year rich gas sale of up to 195 MMcf/d to Aux Sable,” McAllister said. “Six wells have been completed with different versions of Encana’s high-intensity stimulation with five of the six on or above type curve, 100-130% of type curve with a range of 14 to 350 days of history. Liquid yields continue to be very strong, with three of the wells over 300 per bbl/MMcf.”

The waylaid drilling program in the TMS restarted early this year; two rigs now are in operation. The last three wells, one operated by Encana, were brought on production or exceeding type curve expectations. More interest in the play by other producers should fuel growth this year, said McAllister.

The five plays were to be the foundation for Encana’s growth. However, the company was able to add a sixth position in the Eagle Ford Shale earlier this month (see Shale Daily, May 7). The play doubled Encana’s oil output and provides another building block, Suttles said.

Getting a tighter grip on capital outlay and direction has enabled Encana to be quicker on its feet, he told analysts. At the end of March Encana had close to $2.2 billion in cash and cash equivalents on its balance sheet, including $1.8 billion from selling the Jonah gas field to an affiliate of TPG Capital and $530 million on the sale of some East Texas properties (see Shale Daily, April 29). Encana also has sold its North American liquefied natural gas fueling businesses.