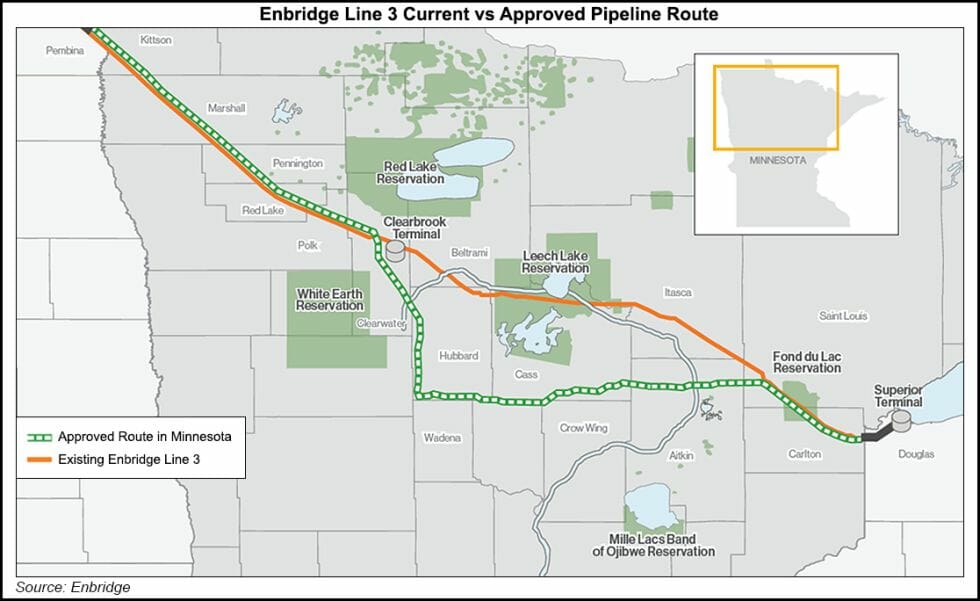 In a letter to Enbridge, the MPCA said it shelved the permit application by a formal “denial without prejudice,” which would allow the Calgary-based operator time to resubmit a revised permit.

The step by the MPCA would give Enbridge time to do an environmental impact statement (EIS), which was ordered by the Minnesota Court of Appeals in June regarding project effects on the Lake Superior watershed.

Meanwhile, the Minnesota Public Utilities Commission voted unanimously Tuesday to restart the approval process for the Enbridge project, directing the state commerce department to obey the June appellate court order by doing an environmental review of oil spill hazards in the Lake Superior watershed. The direction requests a report within 60 days.

State law bars permit decisions until project environmental assessments are complete. The federal Clean Water Act sets a one-year deadline for state decisions on permit applications. The MPCA said it had to act because the clock runs out this month on Enbridge’s Minnesota water quality permit application.

Enbridge would be able to submit another application to make a fresh start on the one-year decision cycle, MPCA noted. To succeed, the agency urged the pipeline to follow suggestions in the appellate ruling by generating an oil spill response model and revised aquatic resource monitoring and wetlands preservation plans.

In a note to clients Tuesday, ClearView Energy Partners LLC said Enbridge has indicated to the MPUC that the required changes to the EIS would be done, with the full EIS resubmitted for an adequacy determination. ClearView estimated that including a public hearing and other reviews, a decision by MPUC could happen by mid-February.

“As the timeline to revise the EIS is coming into focus, we expect other state and possibly federal agencies, such as the U.S. Army Corps of Engineers, to update their permitting review timelines where those approvals similarly relied on the EIS that failed judicial review this summer.”

Last month the Minnesota Supreme Court rejected appeals for a rerun of the state regulatory review of the replacement project involving the Minnesota leg of its crude pipeline. Completion of the Line 3 replacement would revive growth prospects for northern Alberta thermal oilsands production, an industry that serves as Canada’s top natural gas consumer. The replacement and expansion would add 370,000 b/d of capacity.

Construction is finished on the line’s Canadian side, while the completion target for the U.S. portion was previously expected for 2020.