Enbridge Inc. said the opening of a replacement crude oil pipeline across the northern tier of Minnesota will be delayed until next year, after state regulators provided an updated timeline for when the company will receive the remaining environmental permits for the project. 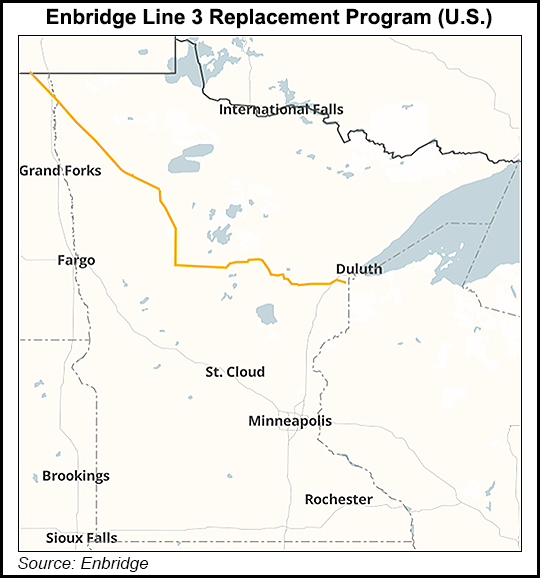 Enbridge said it will develop a revised construction schedule, and now expects to enter the project into service in second half of 2020. It had targeted a start up in the second half of 2019 after receiving a certificate of need and necessity from the Minnesota Public Utilities Commission (MPUC) last June.

“We now have a firm schedule from the state on the timing of the remaining permits for our Line 3 Replacement project,” CEO Al Monaco said Friday. “We support a robust and transparent permitting process that includes opportunity for public input. We’ll continue to work closely with state officials during this process.”

Enbridge has proposed replacing the pipeline, which was built in the 1960s to carry Canadian crude from Alberta through North Dakota and Minnesota to its terminal in Superior, WI. The new pipeline would allow a 370,000 b/d gain in export capacity from the Alberta oilsands, and restore deliveries to the original level of 760,000 b/d, after running at about half-capacity since 2010 because of safety restrictions.

The project has faced dogged resistance from environmental groups and the state Commerce Department, which under former Gov. Mark Dayton urged the Minnesota Court of Appeals to reconsider MPUC’s decision to issue its certificate. Democratic Gov. Tim Walz, who took office on Jan. 7, announced last month that his administration would continue with the appeal.

Analysts with Tudor, Pickering, Holt & Co. (TPH), in a note Monday, said that while some delay was expected, “the second half of 2020 comes later than our expected 1Q2010 in-service, and it sets up a challenging first-half 2020 outlook for Western Canadian crudes,” which could push the potential for “pipeline-driven differentials beyond 2020.”

TPH noted that barring a shift in the outlook, curtailed supply from some Canadian oilsands projects is expected to start up in early 2020, and shifting the replacement in-service may require more crude to be trucked, which may pose problems.

Deliveries are planned to begin in July at 20,000 b/d and climb to 120,000 b/d by 2020 under lease contracts with both of the country’s Canadian Pacific Railway and Canadian National Railway.

While Western Canadian Select oil prices “generally get the focus, tightness in egress in 1Q2020 barring a shift in the supply outlook likely presents a tough setup for all Western Canadian crudes, similar to 4Q2018,” the TPH analysts said.