Just as midstream companies are leaving no stone unturned in their efforts to alleviate oil and natural gas pipeline bottlenecks in the Permian Basin, Enbridge Inc. is looking to repurpose one of its diluent pipelines to offer relief to the oil takeaway problem in Western Canada. 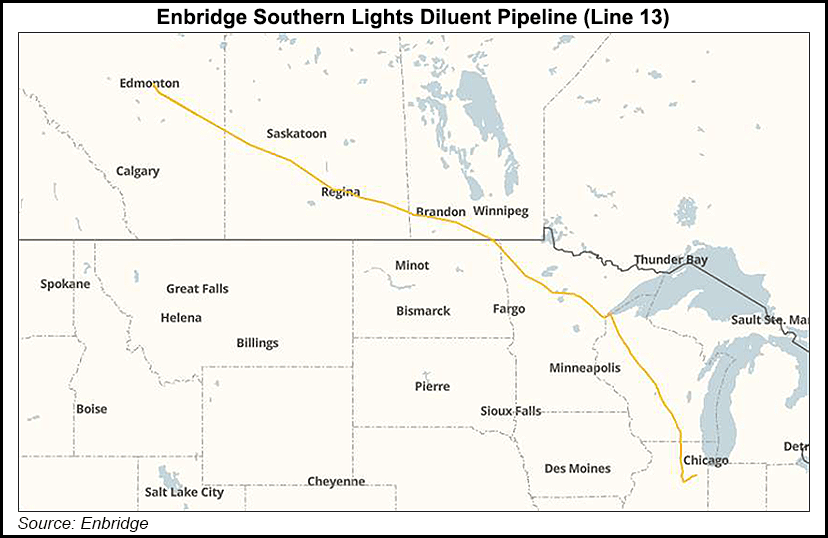 Enbridge earlier in March said it was in discussions with shippers about a potential reversal of Southern Lights, originally brought into service in 2010 to transport diluent, which typically is either condensate or natural gasoline. Also called Line 13, the 1,600 mile, 20-inch-diameter pipeline runs from Illinois to Enbridge’s Edmonton Terminal in Alberta.

Southern Lights is now being considered as a potential conduit for roughly 150,000 b/d of light crude, since growing Canadian diluent production is expected to enable bitumen producers and shippers to gradually reduce their need for U.S.-sourced supply. Enbridge is targeting a 2023 in-service date for the project, which is part of $3 billion in Mainline optimization and enhancement opportunities being eyed for the next four years.

The focus on boosting crude takeaway comes as production in the Western Canadian Sedimentary Basin (WCSB) has increased to roughly 5 million b/d today from around 3 million b/d in 2010, with virtually all of the incremental output available for export, according to RBN Energy. Pipeline capacity from the WCSB to the United States has been rising too, to about 4 million b/d now from around 2.7 million b/d nine years ago, “but not quickly enough to keep up with production gains. Western Canada’s crude takeaway problem is migraine-inducing,” said RBN analyst Housley Carr.

Pipeline reversals and conversions have become an unconventional drilling era mainstay as they help meet ever-shifting takeaway needs in the most cost-efficient way possible, according to RBN. They also minimize the regulatory hurdles that a project, particularly one like Southern Lights, need to clear.

“That, in turn, makes it easier for shippers to sign up for a pipeline reversal project, because the pipe is already in the ground and they have more assurance that the project will actually happen,” Carr said.

Meanwhile, the company is also considering an open season for 50-100,000 b/d in Mainline optimizations that would offer shippers priority access to key U.S. Midwest and Gulf Coast refining markets. Contracts would be for 20 years and tailored to shipper type, with toll discounts offered for high-volume shippers.

Enbridge reported record volumes on its Mainline in 4Q2018 that have continued through February, according to management.

“That’s obviously much needed in a curtailed production environment in Alberta,” CEO Al Monaco said during the 4Q2018 earnings call in February.

Even before the recent announcement, Monaco said he believed the curtailments “were not something that is a long-term plan. I think the whole purpose was to try and deal with some of the overhang on inventory. In the bigger picture, everyone would agree that these, eventually, will come off.”

Enbridge, meanwhile, has delayed until next year opening the Line 3 replacement to move more oil across the northern tier of Minnesota.