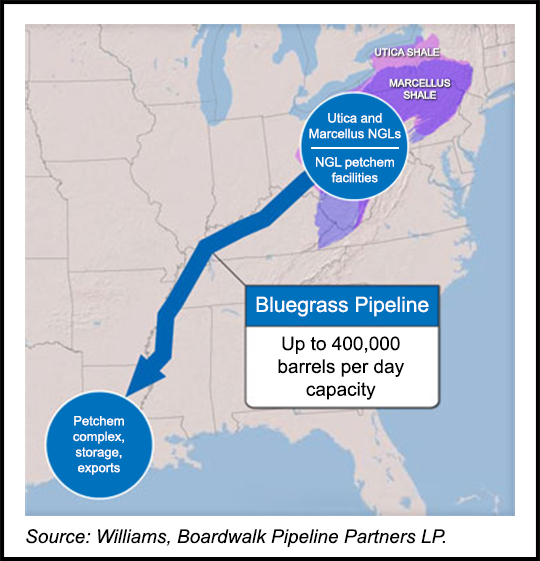 The project, a joint venture of Williams and Boardwalk Pipeline Partners, would carry mixed NGLs from the Marcellus and Utica shales to Gulf Coast facilities and Northeast markets (see Shale Daily, Aug. 9; May 30;March 7).

The pipeline as designed would cut across 150 miles of a northwestern to southeastern portion of Kentucky. At last Thursday’s meeting of the legislature’s Interim Joint Committee on Natural Resources and Environment, an overflow crowd heard from the JV executives, state lawmakers, the Kentucky Oil & Gas Association and about 250 members of the public.

Boardwalk Chief Counsel Mike McMahon told the crowd that NGL pipelines are a “public service.” Using eminent domain “is an absolute last option that is rarely used,” he said. Based on the experience of Williams and Boardwalk in building and operating more than 40,000 miles of pipes, only about 1% of easements required the use of eminent domain.

“That means jobs, and it means Kentucky continues to play a part in making our nation less reliant on foreign sources of energy. It also means about $136 million in new ad valorem tax revenue during just the first 10 years for Kentucky schools, towns and other local recipients.”

The project backers stressed several points about Bluegrass, asserting that once it’s in operation, it would offer a “safe and reliable system” to deliver NGLs. Representatives also highlighted that pipelines are the safest, most efficient means of transporting natural resources, based on government and industry data. Thousands of miles of pipelines currently operate underground in Kentucky, they said.

About 500 miles of the Bluegrass system passing south through Ohio and Kentucky would require new construction, the majority in Ohio. The new construction would connect to 600 miles of existing pipeline that begins in Breckinridge County, KY, then move south. The pipeline would transport up to 400,000 b/d, or 16.8 million gallons/day, of NGLs.

The project would mean $30-50 million would be paid out in total to landowners to secure easements, according to Scheel. More than three-quarters of the property owners along the proposed route in Kentucky already have granted permission for environmental and civil surveys of their property, according to the partners.

“We recognize we are guests and we pledge to be respectful of landowners’ property. To be clear, landowners continue to own and use the land. We are asking to purchase an easement, which is a narrow strip of land about the width of a basketball court where we would bury the pipeline. Landowners can continue to grow crops, raise thoroughbreds and enjoy their land as they did before.”

State Sen. Whitney Westerfield, who attended the hearing, said he has concerns about the companies’ ability to exercise eminent domain, “the concept that organizations, usually public utilities but in this case a private company, can forcibly acquire land for an express public purpose.

“There is no consensus on whether they have such authority,” he said of Williams and Boardwalk.

Westerfield said he supported the “opportunities to boost Kentucky’s local and statewide economies…but I have significant concerns about the forced taking of private lands.”

Bluegrass officials plan to conduct a series of “telephone town hall meetings,” in which residents may participate in discussions from their homes. Questions may be submitted towww.bluegrasspipeline.com or by calling (888) 336-3252.