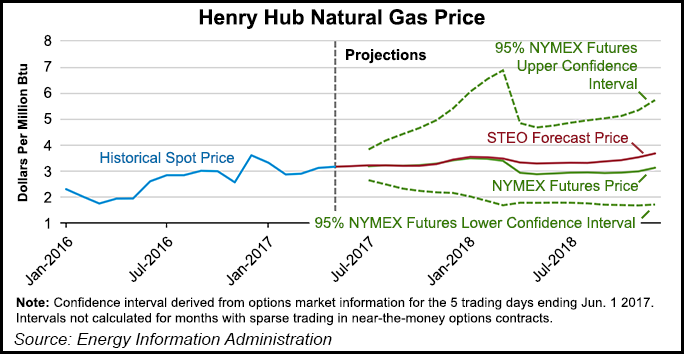 Those estimates are down marginally from EIA’s previous STEO, which included forecasts of $3.17/MMBtu in 2017 and $3.43/MMBtu next year.

The front-month natural gas contract for delivery at Henry Hub tumbled 21 cents/MMBtu from May 1, settling at $3.01/MMBtu on June 1, EIA said.

“On April 27, the front-month futures contract moved from the May delivery contract to the June delivery contract, which was priced higher to account for increased summer demand for natural gas power generation,” EIA said. “The natural gas spot price averaged $3.10/MMBtu in April, up 22 cents/MMBtu from March.”

Capital expenditures for a sampling of U.S. natural gas producers increased year/year in 1Q2017 after almost two years of annual declines, according to the agency. “After averaging $1.98/MMBtu in the first quarter of 2016, natural gas futures prices rose to $3.06/MMBtu in the first quarter of 2017, a 55% year-on-year increase. Higher prices increased cash flow, which helped to stabilize and eventually increase capital expenditures.”

Last Thursday, EIA reported a storage build of 81 Bcf for the week ending May 26, but a reclassification pushed the implied flow for the week to 85 Bcf. As of May 26, working gas in storage stood at 2,525 Bcf, according to EIA estimates, which is 370 Bcf less than the same time last year and 225 Bcf above the five-year average of 2,300 Bcf.

“Inventory levels that are above the five-year average and forecasts of moderate temperatures are contributing to lower prices,” EIA said Tuesday.

Increases in rig counts and drilling efficiencies are contributing to EIA’s forecast of dry natural gas production rising to an average of 76.6 Bcf/d in 2018, up from an expected 73.3 Bcf/d in 2017.