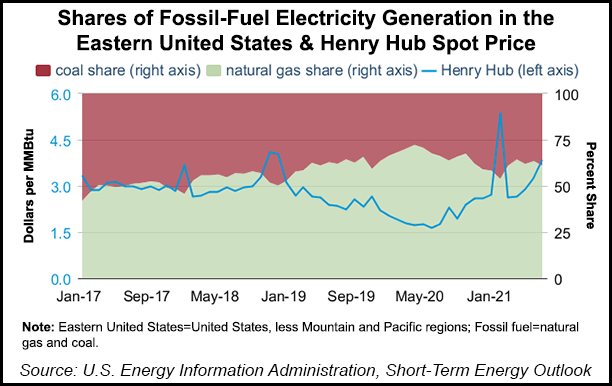 In the latest edition of its Short-Term Energy Outlook (STEO), the agency said it now expects Henry Hub spot prices to average $3.42/MMBtu for all of 2021, up from $3.21 predicted a month earlier. The updated EIA forecast includes an average Henry Hub price of $3.71 for the third quarter.

EIA is raising its expectations for the national benchmark after prices soared to an average $3.84 in July, a nearly 60-cent month/month increase from the June average of $3.26. The agency modeled domestic consumption of 75.8 Bcf/d in July, up 3.9 Bcf/d month/month, attributable to higher demand in the power sector.

As one example, EIA said natural gas saw its share of fossil-fuel generation fall to 51% in November and December of 2018, when prices rose above $4. That was down from a 56% share from February through September 2018, when prices were below $3.

In the first half of 2020, natural gas had a 69% share of fossil-fuel generation as Henry Hub tanked below $2.

EIA pointed to the longer-term decline in coal-fired generating capacity and increases in natural gas-fired capacity as contributing factors behind the relative lack of gas-to-coal switching this year.

U.S. dry natural gas production is on track to average 92.9 Bcf/d during the second half of 2021, up from 91.4 Bcf/d in the first six months of the year. Production is then set to rise to 94.9 Bcf/d in 2022, a result of “natural gas and crude oil prices, which we expect to remain at levels that will support enough drilling to sustain production growth,” researchers said.