Wyoming, the federal Gulf of Mexico (GOM), New Mexico and Colorado collectively accounted for 86% of total natural gas sales from production on federal and Indian lands during fiscal year (FY) 2013, according to a report by the U.S. Energy Information Administration (EIA). 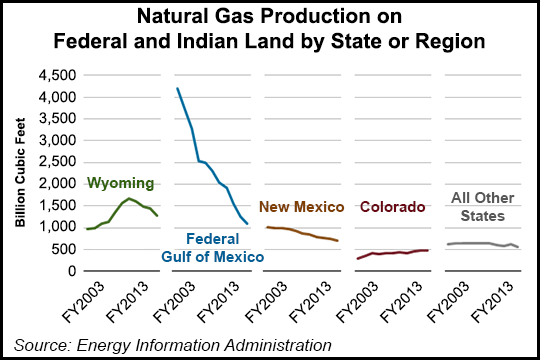 Meanwhile, crude oil sales from production in the GOM made up 69% of production on federal and Indian lands in FY 2013. New Mexico, North Dakota and Wyoming were the next largest crude producers, with the latter two states hosting ramped-up production from the Bakken Shale.

The production figures were first reported on June 19 (see Shale Daily, June 20). The report marks the first time the EIA has compiled an annual production report and broken the data down by state.

New Mexico has seen a slow, steady decline every year for the decade, beginning at 1,005 Bcf in FY 2003; and

The GOM continued to dominate crude oil production on federal and Indian lands, producing 447 million bbl in FY 2013. New Mexico was a distant second at 51 million bbl, but North Dakota has closed the gap to take the third spot (46 million bbl), followed by Wyoming (35 million bbl).

The EIA’s estimates are based on data provided by the U.S. Department of Interior’s Office of Natural Resources Revenue and include sales of production from federal lands, both onshore and offshore, and from Indian lands.