U.S. onshore natural gas production, particularly in the Marcellus Shale, is expected to strengthen through August as drilling productivity rises, according to the latest Drilling Productivity Report issued by the Energy Information Administration (EIA). 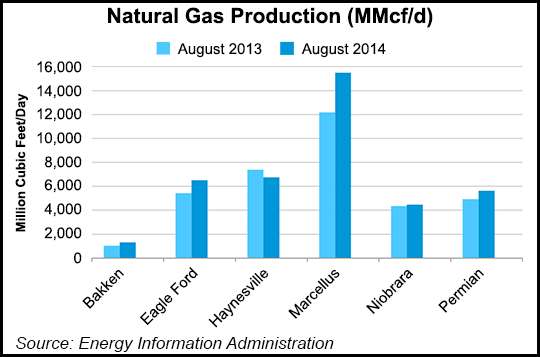 Natural gas volumes/rig are forecast to increase by 0.425 Bcf/d month/month, EIA said Monday. Production from the Marcellus is expected to increase to 15.482 Bcf/d, or gain about 0.247 Bcf/d during the one-month period.

The six regions accounted for 95% of U.S. oil production growth and all domestic natural gas growth during 2011-2013, EIA said. In every region, new-well gas and new-well oil production/rig has risen since August 2013.

EIA used recent data on the total number of drilling rigs in operation, as well as estimates of drilling productivity and estimated changes in output from existing wells to estimate changes in oil and gas production. The method doesn’t distinguish between oil-directed and gas-directed rigs because once a well is completed, it may produce both; more than half of the wells do that.

In the Haynesville, which is spread across East Texas and Northern Louisiana, monthly additions from one average rig should be 82 MMcf/d higher from July through August, or 5,402 from 5,320 MMcf/d. However, gas production is expected to be off year/year — the only region indicating lower gas output. Oil output year/year should be flat at about 23 b/d.

Month/month additions are estimated for “one average rig,” representing EIA’s forecast of an average rig’s contribution to production from new wells. The estimate uses several months of data on total output from new wells for each field, divided by the region’s monthly rig count, lagged by two months.

In response to the EIA report, BNP Paribas analyst Teri Viswanath, who directs the firm’s natural gas commodity strategy, noted what the gas gains, particularly in the Marcellus, are doing to the market. EIA’s estimate of supply growth, along with known transportation constraints, has led to increasing price weakness in the Appalachian Basin this summer, she said.

“The common range for Dominion, South Point prices last Friday ranged from $1.98 to $2.25/MMBtu, which means that a few fortunate buyers actually spent less than $2.00 for their gas…”

Gas supplies from North America “should naturally price at parity with Henry Hub,” she said. “However, we have experienced prolonged periods when stranded supply prices as an extraordinary discount. This occurred with our Rockies supply and once again is occurring with the development of the Appalachian resources.

“Indeed we see the potential that rising Marcellus production is poised to permanently disrupt the traditional Gulf-based pricing paradigm…With the eastern half of the U.S. market increasingly dependent on the Appalachian Basin, we see the possibility that a new supply proxy for this region will emerge. If verified, Henry Hub may well be relegated as a supply proxy for only the Gulf and western markets.”