Retail electricity rates for U.S. residential customers averaged 12.8 cents/kWh during the first half of this year, or about 3% more than the same period in 2016, an increase that was driven by higher fuel costs for commodities like natural gas, according to the Energy Information Administration (EIA). 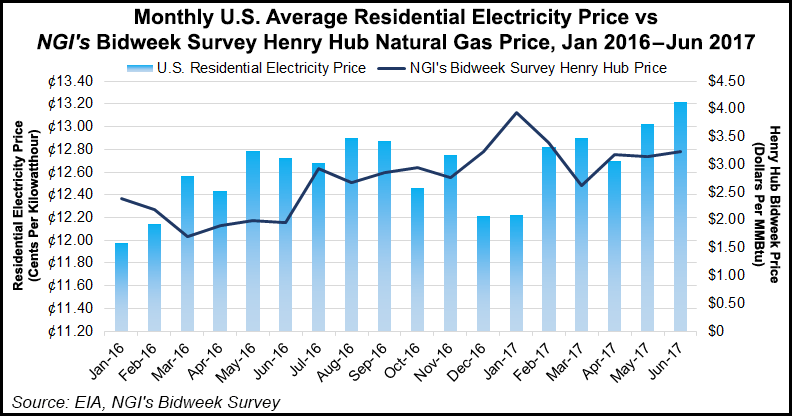 The cost of natural gas delivered to U.S. electric generators during the first six months of the year was 37% higher than it was during the same time in 2016, averaging $3.53/MMBtu, EIA said in a note on Monday. While the delivered cost of coal was down about 2% during the same time, residential rates were also influenced by power utilities recovering expenditures on transmission and distribution infrastructure.

Just six states saw lower prices through the middle of the year. Alaska and Hawaii have the highest residential prices in the nation. Hawaii averaged 23.3 cents/kWh and Alaska averaged 18.1 cents/kWh, up 9% and 5%, respectively, versus the same time in 2016. As a group, the six New England states paid the next highest rates during the first half of 2017, but they were up just 0.5% from the same period last year.

Electricity usage was down across the country, however, with the average residential customer consuming an estimated 812 kWh/month during the period, or about 2% less than the same time in 2016. Milder winter and summer temperatures also reduced heating and air conditioning demand, offsetting the increase in residential electricity prices. EIA said the average U.S. residential electric bill during the first half of 2017 was $104/month, or about the same as it was during the first six months of 2016.

The mild summer weather of this year is expected to keep electricity usage lower through the remainder of the year. EIA expects the typical U.S. residential customer to pay almost exactly the same amount they did last year for electricity at $1,350.

Higher natural gas prices and more generation from renewables and coal are also expected to cut natural gas’ share of U.S. electricity generation in 2017 to about 31%, compared to 34% in 2016, according the EIA’s latest Short-Term Energy Outlook (STEO). Coal’s forecast generation share in the STEO rises from 30% last year to 31% in 2017. Natural gas and coal are expected to generate 31% and 32% of the nation’s electricity, respectively, next year.