The Energy Information Administration (EIA) reported implied flows indicating a 29 Bcf injection into storage inventories for the week ending April 5. The net change week/week, however, was a smaller 25 Bcf build, due to multiple reclassifications in the Pacific and South Central regions that moved some stocks into base gas, rather than working gas. 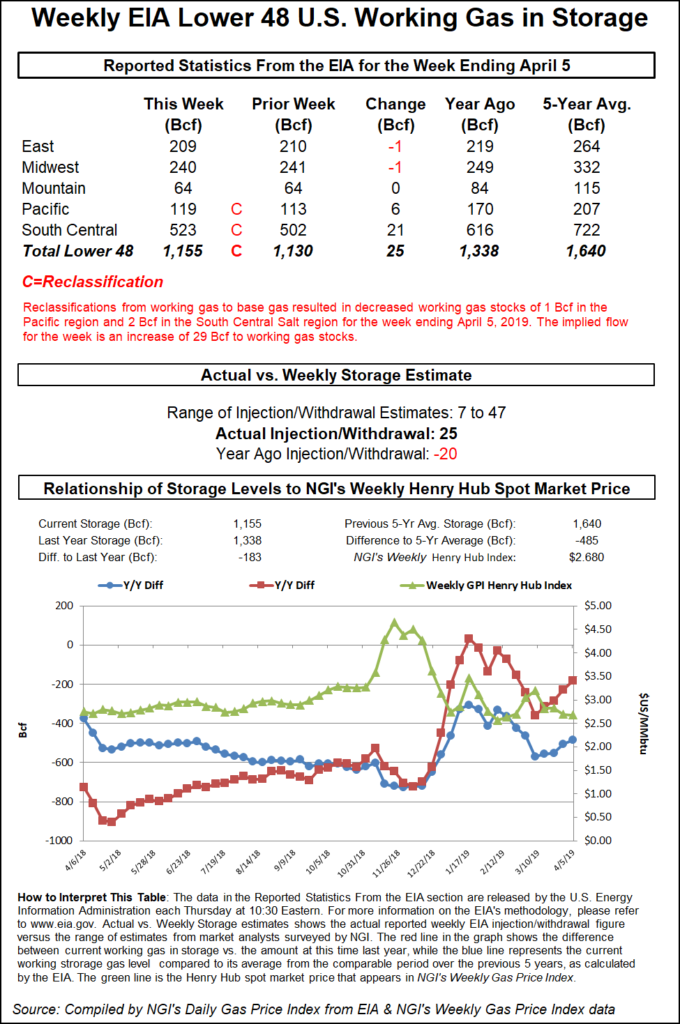 Either way you slice it, the EIA’s reported build came in much larger than last year’s 20 Bcf withdrawal and the five-year average injection of 5 Bcf. Natural gas traders, however, were generally unimpressed as natural gas futures prices budged only slightly following the EIA’s 10:30 a.m. ET report.

The modest bump could be because estimates for this week’s EIA storage report had pointed to an injection in the low 30 Bcf range. A Bloomberg survey of 11 analysts showed estimates ranging from a 7 Bcf build to a 47 Bcf build, with a median of 33 Bcf. Intercontinental Exchange EIA Financial Weekly Index futures settled Wednesday at a 38 Bcf build. NGI’s model projected a 29 Bcf injection.

Analysts said this week’s EIA data was likely a true-up of last week’s overstated injection. “Average the last two weeks together, and everything makes sense,” said Jacob Meisel, head of gas fundamental research at a New York energy trading firm. “Each week in isolation is harder to justify.”

Overall, Bespoke Weather Services viewed the EIA report as neutral. Even though the implied flow was a miss to the bullish side this week, the firm believes the miss simply negates the bearish miss the market saw in last week’s report. “Even at 29 Bcf, it is still reflective of balances that are currently quite loose.”

These loose balances point to another hefty injection versus the five-year average next week as well, though Bespoke suspects balances will begin to improve soon. As such, the firm expects prices to remain in a $2.65-2.75 range in the near term.