Petroleum demand in the United States declined around 2% last week as motor gasoline use fell, while demand for jet fuel saw an uptick for the period leading up to the Thanksgiving holiday, according to the latest data from the Energy Information Administration (EIA). 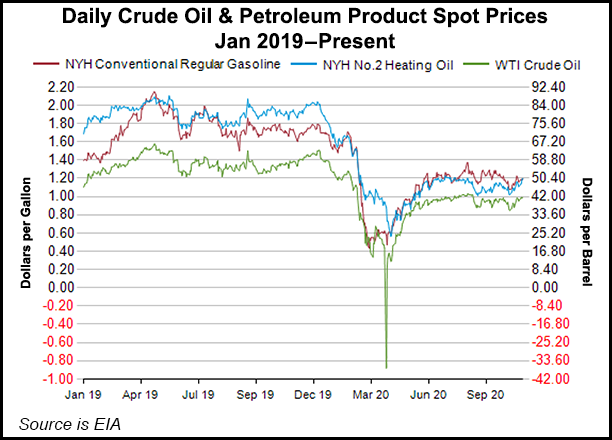 In its updated Weekly Petroleum Status Report, EIA recorded roughly 19.2 million b/d of total petroleum products supplied for the week ending Nov. 20, down from around 19.6 million b/d in the previous week and well shy of the 21.1 million b/d supplied in the year-ago period.

The latest petroleum figures from EIA landed during a strong run for crude oil futures amid encouraging news of a potential Covid-19 vaccine. Just before lunchtime on the East Coast Wednesday, West Texas Intermediate January futures had climbed above the $45/bbl mark.

“The oil price comeback seems unstoppable since news of positive vaccine trials arrived and the rise has sidelined other short-term concerns, even lockdowns and increasing crude inventories,” said Rystad Energy’s Bjornar Tonhaugen, head of oil markets for the firm.

Analysts at Societe Generale in a recent note said the reports of an “imminent, and highly effective, vaccine…point to much stronger commodity demand” ahead.

Still, Tonhaugen suggested the market might be getting ahead of itself.

“The market is taking a big short-term gamble here; demand is definitely not doing any better for the moment due to the vaccine news, lockdowns are keeping road and jet fuels unused and one would wonder how sustainable the price gains are,” the analyst said. “Even if some vaccinations begin in late December, this won’t immediately help oil demand until the remedy applies to large volumes of people.”

A recent analysis of Transportation Security Administration (TSA) data conducted by Tudor, Pickering, Holt & Co. (TPH) showed air travel passengers increasing to around 1.05 million over the past week, up 7% week/week.

This marks only the second time passengers crossed the 1 million threshold, according to TPH, an uptick the firm attributed to Turkey Day travelers. However, “TSA passengers still remain down 55% year/year.”

On the other hand, data indicate a 7% drop in air travel in Europe in the most recent week of data, according to TPH, including a 22% decline in Italy, a 6% drop in the United Kingdom and a 5% drop in Germany. The firm attributed the declines to measures to contain the spread of Covid-19.