The U.S. Energy Information Administration (EIA) on Friday reported a withdrawal of 187 Bcf from natural gas storage for the week ending Jan. 15. It marked the steepest withdrawal of the season and exceeded the midpoint of analysts’ estimates. But it failed to impress, and Nymex natural gas futures faltered. 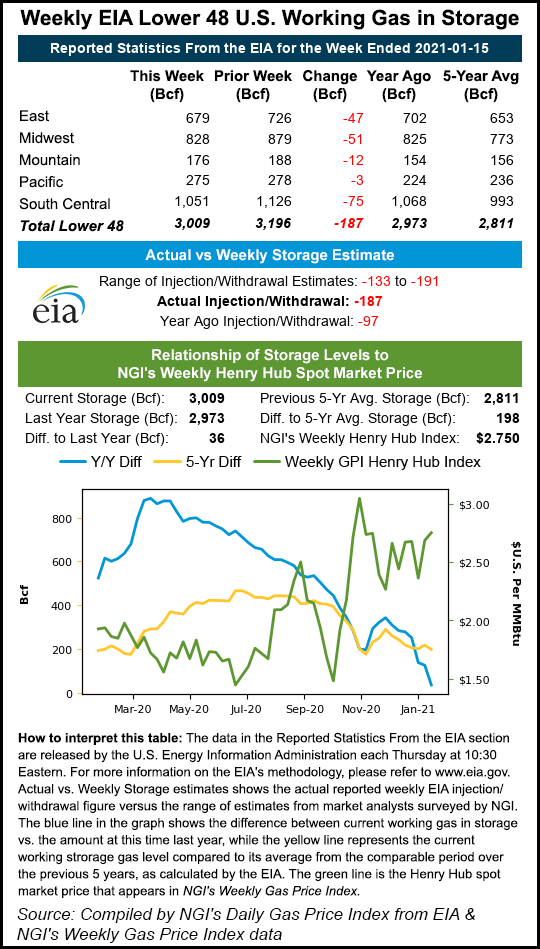 The prompt month fell into a three-day losing streak ahead of Thursday amid weather forecasts that shifted from expectations for a severe and prolonged winter freeze in late January and early February to a less intense blast of cold that appears unlikely to carry into next month.

Bespoke Weather Services called the latest EIA result a “very strong draw” that reflects “a very tight supply/demand balance.” However, the firm added, “that looks to be temporary…As a result, we see no price reaction to the upside from this number, other than a very brief bump up that was quickly sold. We still need to see the weather back away from the big warm look in order to get anything going to the upside.”

Prior to the report, a Bloomberg survey landed at a median expectation for a pull of 175 Bcf, with projections ranging from decreases of 158 Bcf to 191 Bcf. A Reuters poll found estimates spanning withdrawals of 133 Bcf to 191 Bcf, with a median decrease of 178 Bcf.

During the latest covered week, liquefied natural gas (LNG) export levels were strong – near or above 11 Bcf throughout the week – thanks to steady demand from Asia that was driven by frigid temperatures and supply shortages.

Additionally, “it was colder than normal over Texas and the South as a weather system tracked through with rain and snow,” offsetting “warmer than normal across the northern U.S.” during the report period, according to NatGasWeather.

The South Central withdrawal of 75 Bcf led all others and included a 44 Bcf pull from nonsalt facilities and a 31 Bcf pull from salts, according to EIA. The Midwest and East regions followed with decreases of 51 Bcf and 47 Bcf, respectively. Mountain region stocks declined by 12 Bcf, while Pacific inventories fell by 3 Bcf.

This week’s report was delivered on Friday, a day later than usual, because of Wednesday’s presidential inauguration and the Martin Luther King Jr. federal holiday on Monday.

Looking ahead to the next storage report — covering this week — analysts are generally expecting another triple-digit withdrawal. But early estimates point to a lighter pull in the 130s Bcf due to mild temperatures across much of the northern United States and a decline in LNG feed gas flows.

“Running out of momentum soon, I think,” said a participant on The Desk’s online energy platform Enelyst.