Prices for natural gas continue to edge ever lower, and the Energy Information Administration (EIA) doesn’t expect a drastic change any time soon, saying Wednesday that gas will average $2.84/MMBtu this year and $3.11/MMBtu next year. 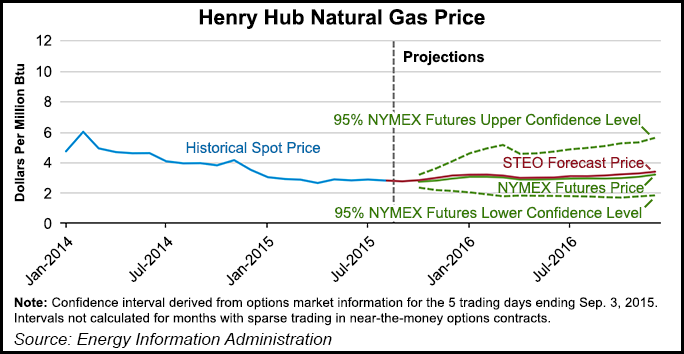 Current options and futures prices imply that market participants place the lower and upper bounds for the 95% confidence interval for December 2015 contracts at $2.08/MMBtu and $4.06/MMBtu, respectively. At this time last year, the natural gas futures contract for December 2014 averaged $4.07/MMBtu and the corresponding lower and upper limits of the 95% confidence interval were $3.09/MMBtu and $5.35/MMBtu, EIA said. The agency expects monthly average spot prices to remain lower than $3.00/MMBtu through November.

EIA expects moderate growth through 2016, with increases in the Lower 48 more than offsetting long-term production declines in the Gulf of Mexico. Increases in drilling efficiency will continue to support growing natural gas production in the forecast, despite relatively low natural gas prices, EIA said.

Most of the growth is expected to come from the Marcellus Shale, as a backlog of uncompleted wells is reduced and new pipelines come online to deliver Marcellus gas to markets in the Northeast.

Natural gas working inventories totaled 3,193 Bcf as of Aug. 28, which is 495 Bcf more than at the same time in 2014 and 122 Bcf higher than the previous five-year average. The agency projected that end-of-October inventories will total 3,840 Bcf, which would be 43 Bcf above the five-year average and the third-highest end-of-October level on record.

Increasing domestic gas production is expected to reduce demand for imports from Canada and support increased exports to Mexico, particularly from the Eagle Ford Shale. “Earlier this year, natural gas net imports fell to the lowest monthly level since 1987, averaging 2.3 Bcf/d in both May and June,” the agency said. EIA projects liquefied natural gas gross exports will increase to 0.79 Bcf/d next year.

Total natural gas consumption is expected to average 76.5 Bcf/d through 2016, up from an estimated 73.5 Bcf/d in 2014. Growth this year is expected to be largely driven by the industrial and electric power sectors, while residential and commercial consumption is projected to decline in 2015 and again in 2016.