Global crude oil prices are on track to average $108/bbl in the second quarter and $102 in the second half of 2022 as Russia’s invasion of Ukraine roils energy markets, according to updated projections from the Energy Information Administration (EIA). 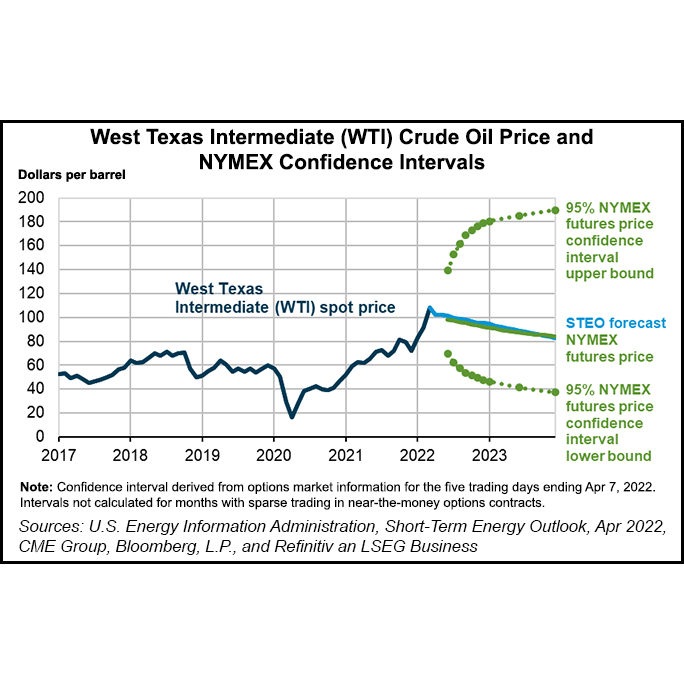 “Sanctions on Russia and other actions contributed to falling oil production in Russia and created significant market uncertainties about the potential for further oil supply disruptions,” researchers said. “These events occurred against a backdrop of low oil inventories and persistent upward oil price pressures.”

“Actual price outcomes will depend on the degree to which existing sanctions imposed on Russia, any potential future sanctions, and independent corporate actions affect Russia’s oil production or the sale of Russia’s oil in the global market,” the EIA researchers said.

How other oil producers respond to higher commodity prices and the impact of “macroeconomic developments” on global demand will also be important in influencing the trajectory of prices in the months ahead, the agency said.

Between the third quarter of 2020 and the end of 2021, global oil inventory draws averaged 1.7 million b/d, according to EIA.

Even after cutting its projections for Russian oil production, EIA predicted an inventory build rate of 0.5 million b/d on average between 2Q2022 and the end of 2023.

“However, if production disruptions — in Russia or elsewhere — are more than we forecast, the resulting crude oil prices would be higher than our current forecast,” researchers said.

As the market has keyed in on supply adequacy fears and sent prices soaring well above $6.500/MMBtu this month, domestic production trends have taken on increased significance in setting the tone for prices.

EIA estimated domestic output of 96.2 Bcf/d in March, up 1.2 Bcf/d from February levels.

“Similar to January and February, production in March was lower than in December because of brief periods of freezing temperatures in certain production regions and, in part, because of maintenance, according to public sources,” researchers said.

Perhaps unsurprisingly in the context of recent price trends, the latest STEO Henry Hub forecast reflects a marked increase from the 2Q2022 average of $3.83 the agency modeled a month earlier.

“LNG prices in Europe remain high amid supply uncertainties due to Russia’s further invasion of Ukraine and the need to replenish Europe’s natural gas inventories, which has kept Europe’s demand for LNG elevated,” researchers said. “Inventories in Europe were 26% full as of March 31, compared with the five-year average of 34%.”

U.S. LNG exports are expected to remain at “high levels” through the year, with an anticipated 2022 average of 12.2 Bcf/d, a 25% year/year increase, according to the latest STEO.

Domestic natural gas consumption, meanwhile, is set to average 84.1 Bcf/d for 2022, a 1% increase over 2021 levels. Researchers attributed the higher forecast demand in 2022 to increased residential/commercial demand and higher industrial consumption “in response to expanding economic activity.”

“A wide range of potential macroeconomic outcomes could significantly affect energy markets during the forecast period,” researchers said. “Energy supply uncertainty results from the conflict in Ukraine, the production decisions of OPEC-plus, and the rate at which U.S. oil and natural gas producers increase drilling.”