The U.S. Energy Information Administration (EIA) said Monday that the Marcellus Shale region is expected to provide 18% of the country’s natural gas production in December as more takeaway capacity has come online and operators continue to maximize drilling efficiencies in Pennsylvania and West Virginia. 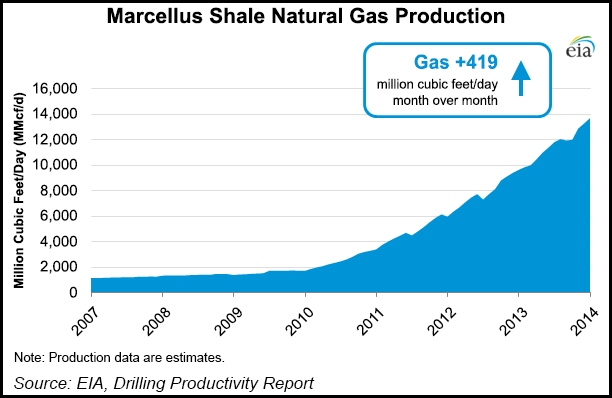 The revelation comes as part of a highlight from the agency’s monthly drilling productivity report, which tracks developments in the Bakken, Eagle Ford and Haynesville shales, as well as the Niobrara formation and Permian Basin.

The rig count has remained largely flat throughout much of this year. It dropped by 18 in Pennsylvania this week compared to the same time last year by Baker Hughes’ count. Despite that trend, natural gas production has continually climbed. The Marcellus region produced just 2 Bcf/d as recently as 2010.

Production from new wells continues to grow as operators stack longer laterals and add more frack stages. The EIA’s highlight shows that production per rig in the Marcellus will pass a new milestone this month, with each rig averaging a bit more than 6 MMcf/d and projecting rigs will produce nearly 6.2 MMcf/d next month.

According to NGI’s Weekly Gas Price Index, gas was trading at an average of $3.93/Mcf at the Henry Hub last week, and ending the week at over $4.00/MMBtu.

In November, pipeline operators opened the taps on four projects to move gas northeast from the Marcellus (see Shale Daily, Sept. 25). That move added 1.8 Bcf/d to takeaway capacity. Other projects will add a total of 1.99 Bcf/d to Marcellus capacity this winter, according to the EIA.