April is likely to be another in a series of sluggish natural gas and oil production months for the nation’s seven largest unconventional plays, according to the Energy Information Administration (EIA). 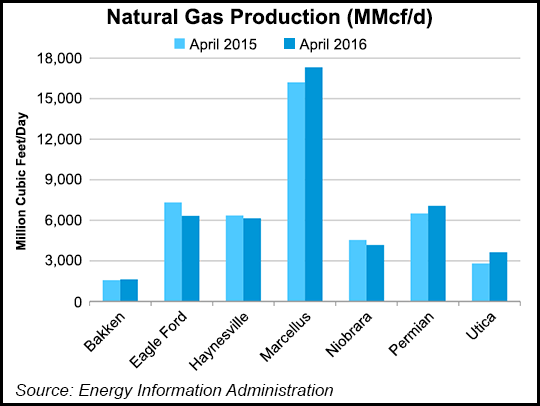 Total natural gas production from the plays will be an estimated 46.31 Bcf/d in April, a 450 MMcf/d decline from 46.76 Bcf/d this month, EIA forecast in its latest Drilling Productivity Report (DPR), which was released Monday. That’s about the same month-to-month decline EIA had forecast for February-March in its previous DPR (see Shale Daily, Feb. 9).

The biggest decline is expected to come in the Eagle Ford Shale, where EIA is forecasting production of 6.34 Bcf/d in April, down 182 MMcf/d from 6.52 Bcf/d this month, but declines are forecast for all seven plays analyzed in the DPR. The agency expects 17.32 Bcf/d out of the Marcellus Shale next month, compared with 17.43 Bcf/d in March.