Natural gas and oil production from the seven most prolific U.S. onshore unconventional plays in December will continue a two-year upward progression, with gas output expected to reach 75.08 Bcf/d and oil an estimated 7.94 b/d, according to the U.S. Energy Information Administration (EIA). 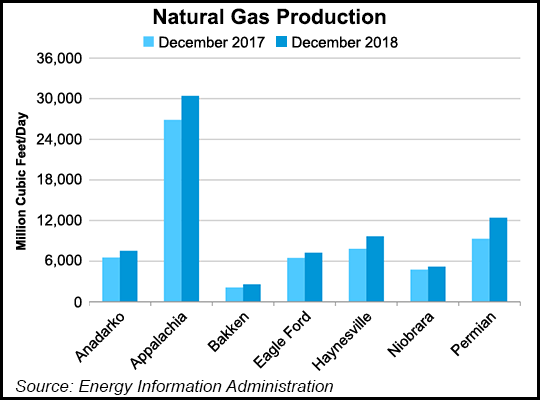 Those estimates are both higher than production this month, EIA said in its latest Drilling Productivity Report (DPR), released Tuesday. EIA said it expects total gas production in November from the the seven key regions — the Anadarko, Appalachian and Permian basins, and the Bakken, Eagle Ford, Haynesville and Niobrara formations — to be 74.04 Bcf/d, and oil production to be 7.83 million b/d.

About 40% of the natural gas production increase in December will come out of the mighty Appalachia Basin, home to the Marcellus and Utica Shales. Production there is expected to reach 30.43 Bcf/d, up from 30.03 Bcf/d this month, according to the DPR.

Production increases in December are expected almost across the board on the oil side of the ledger as well, according to the DPR.

Drilled but uncompleted (DUC) well counts across the Big Seven ended October at 8,545, an increase of 269 from September, EIA said.

The bulk of the DUCs, and the largest increase in DUCs, was again in the Permian, which jumped 249 in October to 3,866, and in the Eagle Ford, which increased 25 to 1,571. Three Big Seven plays saw their DUC numbers decrease from September: Appalachia (minus 19), the Bakken (minus 20) and the Niobrara (minus 14).