As it weathered the commodities downturn and grappled with the problems it created, Ohio pure-play Eclipse Resources Corp. again went back to the drawing board to determine how it could better increase estimated ultimate recoveries, efficiency and above all, returns, CEO Benjamin Hulburt told an industry crowd this week in Pittsburgh. 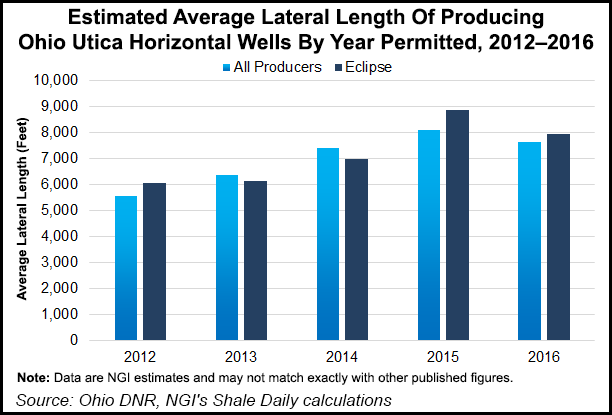 The answer, of course, was in the company’s core asset thousands of feet underground in the Utica Shale, where more than a year ago Eclipse drilled, completed and turned to sales the Purple Hayes 1H well with an 18,544 foot lateral. It has since finished drilling two similar wells, beating the Purple Hayes’ record in the first quarter with a 19,300-foot lateral and again last week after it finishing another 19,600-foot lateral.

“One thing to point out: we have not seen any loss of recovery per foot as we’ve gone longer,” Hulburt said Tuesday at Kallanish Commodities’ 2017 North America Oil & Gas conference. “This is probably the biggest bit of skepticism we get from most of our peers. That’s not necessarily true in every formation. The Utica Shale in particular has a very high carbonate percentage; it fractures very, very well. In the Utica, this has worked very well. It does not mean that it will in every formation.”

Any lateral longer than 15,000 feet Eclipse now dubs a “super lateral.” When the company first started operating in the Utica, it was drilling 5,000- to 6,000-foot laterals like many others were in 2012 and 2013. Hulburt recalled the first Marcellus Shale well he participated in, which extended just 2,500 feet horizontally in 2009. “We were amazed with ourselves,” he said. “Today, that would obviously sound a little silly, but it’s really amazing the way the industry has changed.”

Operators across the country have been targeting their core acreage in recent years, focused on optimizing development with longer laterals and shorter stage spacing. Eclipse management has repeatedly touted the company’s record setting onshore super laterals. By comparison, ExxonMobil Corp.’s Sakhalin 1-Project offshore far east Russia is widely thought to be the world’s longest extended reach well. An ExxonMobil subsidiary drilled the Odoptu OP-11 well to a total measured depth of 40,502 feet in 2011 with a horizontal reach of 37,648 feet, or more than seven miles.

To increase efficiency, Eclipse also has aimed to decrease drilling days; use more slickwater completions; shorter stage spacing; increased proppant loading; pressure management, and engineered flowback. While it’s shared those goals with other operators, Hulburt said the company took a page from offshore operators before it drilled the Purple Hayes, assembling each person involved with every stage of drilling a large shale well under one roof to form a specialist team.

“By doing that,” he added, “it almost instantly dropped our drilling days in half. After that, we focused on drilling longer and longer laterals.” It took less than 18 days to finish drilling all three super laterals. While the company plans to complete its most recent pair later this year, the Purple Hayes was completed in less than 24 days. Hulburt, who co-founded Marcellus Shale-focused Rex Energy Corp. before leaving to establish Eclipse, said that “when we all started in the Marcellus, by day 18 we were still just getting ready to spud a well.”

Eclipse has nearly 114,000 net acres across just five Ohio counties. While most of the land is prospective for the Utica, about 14,000 acres overlays the liquids-rich Marcellus. Hulburt said Thursday that the company is “always looking at assets in Pennsylvania,” and he added that “I’m sure at some point we’ll venture back into the state.”

The company also plans to apply its super lateral techniques in Ohio’s Marcellus, but Hulburt acknowledged that could be tricky given the formation’s geological characteristics. The company will start simple, though. It plans to complete two Marcellus condensate wells this year with 8,000- and 10,000-foot laterals. Eclipse operates just one producing Marcellus well in the Buckeye state.

In any event, the company hopes its longer wells can drive down finding and development costs and significantly boost well returns. Applying the techniques learned over several generations of Utica wells such as pressure management, Hulburt added, has likely added 10-15% to EUR over time.

“What it allows us to do is drill and complete wells 30% cheaper per foot of productive lateral,” Hulburt said of the longer wells. “We do intend to apply this in the Marcellus Shale as well. But we’re starting much like we did in the Utica; we’re reaching our way out there.”