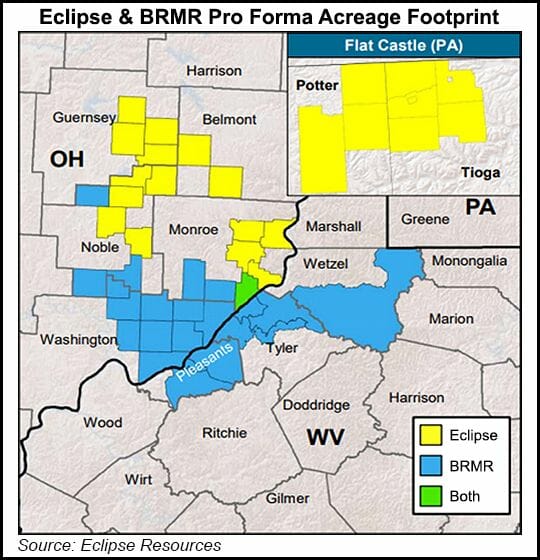 Under terms of the transaction, Blue Ridge would become a subsidiary of Eclipse. Blue Ridge stockholders for each share are to receive 4.4259 shares of Eclipse, a deal that values Eclipse stock at $7.44/share based on the Friday (Aug. 24) closing price.

The transaction has an enterprise value of about $1.4 billion and an equity value estimated at $908 million, executives said. Once the transaction is completed, Eclipse shareholders would own about 57.5% of the combined company, with Blue Ridge owning 42.5%.

Eclipse CEO Benjamin Hulburt, who co-founded the independent in January 2011 and has served as chairman, CEO and president since its inception, called the merger “compelling” and a “combination that allows both of us to consolidate premier assets that significantly increase the company’s production and cash flow, seamlessly fit into a consolidated drilling program,” as well as provide “considerable” general and administrative synergies.

Eclipse holds close to 156,000 net acres in Ohio and Pennsylvania, with about 15,500 prospective for the Marcellus. Known for drilling some of the longest super laterals ever in Ohio’s Utica, Eclipse has faced a financial crunch. Second quarter production hit the top end of guidance with volumes of 305.2 MMcfe/d.

Blue Ridge CEO John Reinhart is to lead the combined company. He formerly was COO of Appalachia-focused Ascent Resources LLC, initially created by Chesapeake Energy Corp., where Reinhart worked for about nine years.

Once the tie-up is completed, expected by year’s end, expanded development is set to begin by 2Q2018, Reinhart said. Initial plans are to run three rigs, with two for natural gas and one for natural gas liquids (NGL).

“We’re going to be very nimble, very mindful and flexible about how the capital is allocated in the future,” he said. The rigs would be drilling more for natural gas, “but it’s not set in stone. If we see commodity prices move and NGL prices move higher, we’re going to be mindful from a midstream perspective and also make decisions on the overall economics, which could change the rig allocation mix in the future.”

The merger should help the company increase production by 20%-plus a year and still live within cash flow, he said. Free cash flow generation is anticipated by 2020.

The merger agreement ends a strategic review launched earlier this year by State College, PA-based Eclipse. The combination with Blue Ridge would roughly double its size and provide more scale to drilling long wells. The transaction also is expected to improve Eclipse’s leverage ratio to 2.1 from 2.8, with a line of sight to reduce it in the near term to 1.5-1.7.

The combined company, Reinhart said, “will possess a substantial scale advantage and an excellent foundation for significant organic growth with attractive cash flows while maintaining the optionality for bolt-on value-accretive acquisitions within the basin.”

Eclipse financial chief Matthew DeNezza is to serve as interim CFO for the combined company, while COO Oleg Tolmachev would continue in his current role. Blue Ridge general counsel Paul Johnston would take over in the same role for the combined company. Blue Ridge’s Matthew Rucker, now vice president for resource planning and development, is to become senior vice president for resource planning and development.

Once completed, the Eclipse board would consist of 10 directors, with Blue Ridge and Eclipse each designating five directors.