A decline in liquefied natural gas (LNG) demand aided a small pullback in natural gas futures on Wednesday. With weather models stabilizing around a warm outlook for the first half of January, the new prompt February Nymex contract settled at $2.422/MMBtu, down 2.2 cents from Tuesday’s close. March slipped 1.7 cents to $2.422. 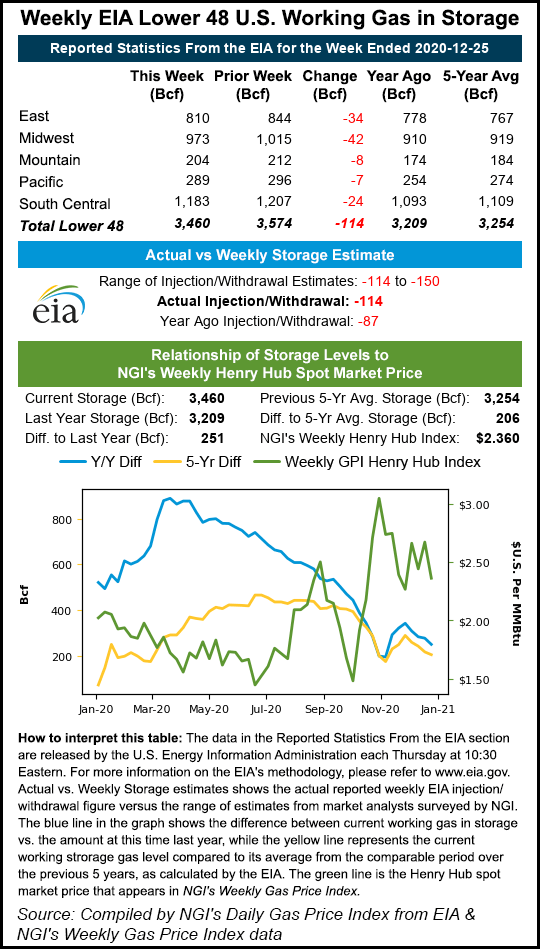 After some major price fluctuations during the first two trading sessions of the short holiday week, Wednesday’s more muted action along the Nymex futures curve offered traders a chance to digest the whirlwind swings.

“As the market limps towards 2021, there are numerous questions in the air regarding the price path in the New Year and the fundamental factors that will be at play,” said Mobius Risk Group.

With weather models offering little new insight into the January pattern, Thursday’s government storage report may be the next big price mover for the February contract.

The Energy Information Administration (EIA) is scheduled to release its weekly inventory report at 10:30 a.m. ET Thursday. Analysts are expecting another larger-than-normal draw, with major surveys ahead of the report clustering around a pull in the mid-120s Bcf. Last week, EIA reported a 152 Bcf draw that lowered stocks to 3,574 Bcf, which is 278 Bcf above year-ago levels and 218 Bcf above the five-year average.

For the coming EIA report, a Bloomberg survey of nine analysts showed an unusually wide range of withdrawal estimates from as low as 88 Bcf to as large as 150 Bcf, with a median of 126 Bcf. A Wall Street Journal poll showed estimates within that same range, with an average of 129 Bcf. A Reuters poll of 16 market participants showed withdrawals as low as 85 Bcf, but the median was near those of other surveys, at 125 Bcf. NGI pegged the pull at 124 Bcf.

Last year, the EIA recorded an 87 Bcf draw for the similar week, while the five-year average is a 102 Bcf draw.

Beyond the EIA report, Mobius said LNG exports are likely to continue garnering much attention in 2021, especially given the volatility on display this year. After being a “drag” on the U.S. gas market in the spring and summer, exports of the super-chilled fuel made a 180-degree turn as they reached record levels and neared maximum capacity.

“How the call on U.S. LNG progresses through the New Year will have much to do with the resilience of the Nymex natural gas market,” Mobius said.

Meanwhile, gas consumption in the power sector also is expected to be closely monitored, according to Mobius. The firm pointed out that power burn is “arguably the most price elastic,” with Appalachian production at times battling for the title when regional prices dip below $1.25.

The past year was the third consecutive annual increase in consumption as a percentage of total load, Mobius said, and the uncertainty on how sustainable this trend is may have a material market impact during the summer months. The Nymex curve currently is back to favoring strong consumption in the power stack, but when the market once again retests the $3.00 threshold, “the debate on power consumption will heat up once again.”

Meanwhile, Covid-19 is to remain a major factor that could continue to influence demand in the Lower 48 and around the world in 2021. Although two vaccinations are available in the United States, only an average of 200,000 people a day are receiving the long-awaited shot in the arm, and only a small percentage of the shipments sent to states this month have been used, according to federal and state data.

The Centers for Disease Control and Prevention tally as of Monday showed that despite the distribution of 11.45 million doses from Moderna Inc., Pfizer Inc. and BioNTech SE, only 2.13 million people had gotten shots. That represents about 20% of early allocations. The Trump administration had a goal of 20 million vaccinations by year-end.

Spot gas prices were stronger across much of the country, but the small increases paled in comparison to the steep declines on the West and East coasts.

Appalachia prices moved only a few cents in either direction. Texas Eastern M-3, Delivery slipped 3.5 cents to $2.200 as a force majeure declared Tuesday by the pipeline doesn’t appear to be having any impact on the market.

Texas Eastern Transmission (Tetco) implemented the force majeure because of an unplanned outage at its Lilly, PA, compressor station on the M3 Penn-Jersey Line, impacting capacity through the line. The biggest constraint is through Delmont, where capacity has been reduced by 230 MMcf/d to 2.35 Bcf/d, according to Wood Mackenzie. Over the last 30 days, flows through Delmont have averaged 1.86 Bcf/d and maxed at 2.43 Bcf/d, although flows have traded downwards since mid-December.

“This outage will not be impactful compared to recent flows,” said Wood Mackenzie analyst Josh Garcia. “Despite this outage being bullish in nature, weather models predict mild temperatures for the next two weeks, and as such, it is unlikely that demand will ramp up for this outage to cause price volatility in the Northeast.”

Garcia also noted Tuesday’s action at Tetco M-3, Delivery, where prices fell 4 cents despite the outage, “further emphasizing that this outage will not be impactful.”

Garcia said another force majeure event in Tennessee also was having limited impact on the market. East Tennessee Pipeline declared a force majeure due to an unplanned outage on its 3200 Line between the Calhoun and Madisonville compressors. As a result, capacity through the Calhoun compressor would be reduced to zero.

“Over the last 14 days, flows through Calhoun have been bidirectional but minimal, with Northeast flows maxing at 33 MMcf/d and southwest flows maxing at 20 MMcf/d,” Garcia said. “So far, reported capacities have not yet fallen to zero, but this outage will not be impactful either way.”

Neither outage had an estimated return to service.