Texas-based independent Earthstone Energy Inc. is gobbling up all of the oil and natural gas assets held in the Permian Basin by privately held Sabalo Holdings LLC, including 20,800 net acres in the Midland sub-basin of West Texas, in a cash-and-stock deal estimated at $950 million. 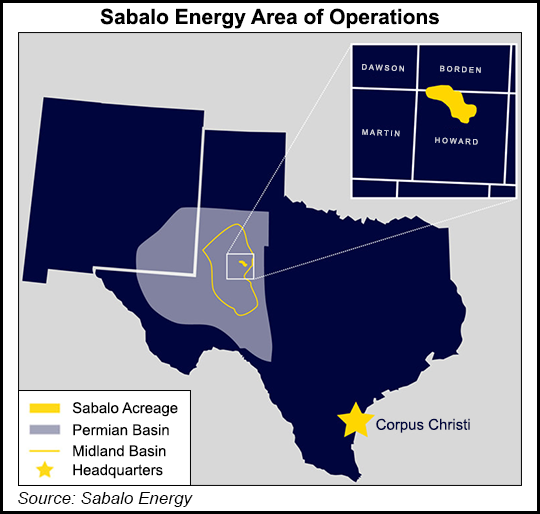 Earthstone, headquartered in The Woodlands north of Houston, agreed to acquire interests in Sabalo Energy LLC and Sabalo Energy Inc., with producing and nonproducing assets in the northern part of the Midland, mostly in Howard County. The deal would increase its Midland footprint by more than two-thirds (69%).

“The Sabalo acquisition is an important milestone in our ongoing transformation into a premier Midland Basin focused operator,” President Robert J. Anderson said. “We have delivered on our goal,” which follows the business combination last year with Bold Energy III LLC.

Sabalo, based in Corpus Christi, TX, is a portfolio company of private equity giant EnCap Investments LP. To complete the transaction, Sabalo acquired and then included in the deal some well-bore interests held by its Permian drilling joint venture partner Shad Permian LLC.

The combined acreage of Sabalo and Shad in September had average estimated production of 11,200 boe/d, 83% weighted to oil. Sabalo’s acreage position is 86% held by production, with an average 90% working interest in operated units. Average operated lateral lengths have been around 9,160 feet. There also is extensive infrastructure already in place including midstream transportation, water sourcing and saltwater disposal assets.

“With the addition of this especially attractive contiguous acreage to our existing Midland Basin assets, we have positioned Earthstone to capitalize on increased scale and strong asset quality in order to generate significant returns,” Anderson said. “This contiguous acreage block in the heart of the northern Midland Basin with a deep inventory of high-return drilling locations provides an exciting foundation for growth.”

Earthstone already has identified nearly 500 gross operated locations in the Middle and Lower Spraberry and Wolfcamp A and B formations. The acquisition “should drive a number of additional benefits as we now have the ability to secure dedicated services and focus on further improving corporate and field-level operating efficiency,” Anderson said.

Sabalo is running two rigs on its Midland holdings, and it has increased oil production in the past year by an estimated 300%, according to Earthstone.

“We expect production to continue to increase,” Anderson said, “and our plan is to maintain those two rigs and the single rig we have been operating on our southern Midland Basin acreage since May 2017. We have a clear line of sight toward being cash flow positive in 2020.”

Under terms of the transaction, Earthstone agreed to pay $650 million cash and trade an estimated $300 million in stock. The purchase price could be increased by around $26 million in cash to account for nearly 1,330 acres acquired after the effective date of the acquisition.

The transaction is expected to be completed by early next year, subject to customary closing conditions, including the approval by Earthstone stockholders.

Earthstone and Sabalo together have around 50,800 net acres in the Midland, 81% operated, across the West Texas counties of Howard, Midland, Reagan and Upton. Combined output is 21,850 boe/d, 75% weighted to oil and 89% liquids. Proved reserves volumes combined are 174 million boe.

Assuming the acquisition closes on Jan. 1, Earthstone expects full-year 2019 production to average 25,000-29,000 boe/d, 70% weighted to oil on capital spending of $425-500 million. The estimate is based on a three-rig program, as well as a similar level of activity in Earthstone’s Eagle Ford Shale portfolio this year.