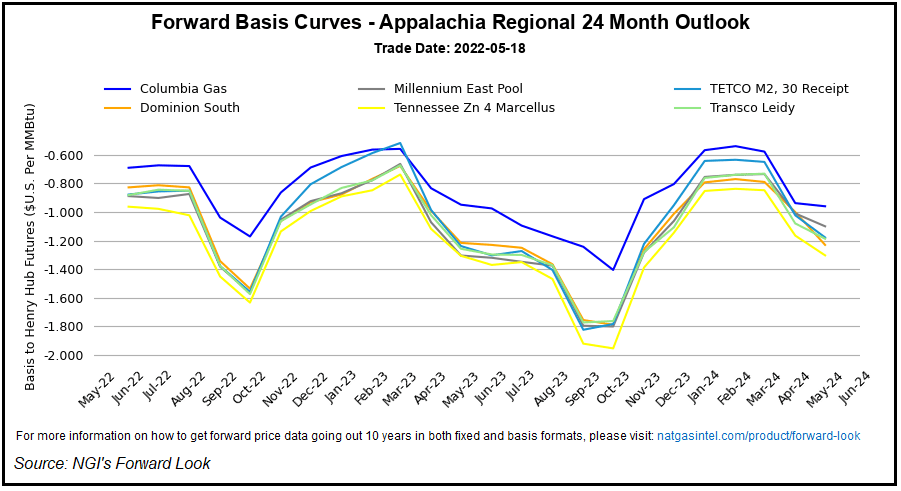 June fixed prices jumped an average 64.0 cents, as did the balance of summer (June-October), according to NGI’s Forward Look. The winter 2022-2023 package (November-March) bounced an impressive 58.0 cents on average through the period, while the Calendar Year 2023 strip shot up 33.0 cents on average.

Basis trading again was mostly muted, with U.S. markets largely following the benchmark Henry Hub higher against a bullish macro backdrop. California markets were an exception, but it wasn’t the heat that boosted prices at the front of the curve. Instead, the region was bracing for yet another round of brutal cold that would bolster demand.

The National Weather Service (NWS) said the surge of cold air associated with a digging upper trough would spread over much of the western United States. Unseasonably cold temperatures along with a round of heavy mountain snows were likely, first from the northern Rockies and then down to the Colorado Rockies today. Up to 10 inches of snow are possible, according to the forecaster.

Strong and gusty winds also are expected in these areas into the High Plains as the low pressure system intensifies. The surge of cold air was expected to bring a dramatic drop of temperatures from the 90s down to freezing across the central High Plains, NWS said. The potential exists for more than one foot of snow across the higher elevations of the Colorado Rockies, while accumulating snowfall can be expected down into the central High Plains.

That said, the western United States remains mired in an ongoing drought. The eventual shift to summer weather means the region could struggle to meet air-conditioning loads when temperatures soar to extreme levels. Imports of power already are strained because of low water levels at regional reservoirs, which may lead to a stronger pull on gas-fired generation.

As such, fixed prices at the SoCal Citygate for the balance of summer (June-October) averaged $10.090, up 58.0 cents through the period, Forward Look data showed. Winter prices also rose above the $10.00 mark, averaging $10.419.

Wood Mackenzie noted early Tuesday (May 17) that Northeast production had tumbled around 500 MMcf/d day/day. About 300 MMcf/d of the drop was concentrated in Northeast Pennsylvania, primarily along the Transcontinental Gas Pipe Line Co. (Transco).This was attributed to a 10-day maintenance event that kicked off that day along the Leidy Line.

As part of the planned facility modification work on the 24-inch diameter Leidy Line A, available total scheduled quantity at Leidy Line Aggregate Receipt MP 101 was to be cut to 0.98 Bcf/d from 1.37 Bcf/d. As a result, 121 MMcf/d of flow was expected to be restricted for the full duration of the event.

“Previously, for the past 30 days, Leidy Line Aggregate Receipt MP 101 E to W NL has flowed on average of 1.02 Bcf/d and has maxed at 1.13 Bcf/d,” said Wood Mackenzie analyst Young Liu.

In addition, Millennium Pipeline carried out a one-day event on Tuesday, while work at the Minisink and Hancock compressor stations was expected to last until the end of May.

EBW Analytics Group noted that the falling throughput on Transco into the Southeast increased bids on South Central gas to backfill falling supplies from Appalachia. This put upward pressure on the spot market at Henry Hub early this week, especially with heat building across the southern United States.

“The market continues to be exquisitely sensitive to changes in production, and any rebound in daily pipeline supply nominations over the next seven to 10 days could help to restrain gains,” EBW senior analyst Eli Rubin said.

Domestically, rising production can both soften the near-term supply/demand balance while lifting anticipated supply through next winter, according to EBW. This would reduce the extent of long-term shortage fears. However, current inventories remain woefully short of historical levels with nearly two months of the traditional injection season nearly finished.

On Thursday, the latest government data showed little improvement in the supply picture. The Energy Information Administration (EIA) reported an 89 Bcf injection into inventories for the week ending May 13. The build was in line with expectations, but still left stocks sitting 310 Bcf below the five-year average.

South Central inventories were up 32 Bcf on the week, including a 24 Bcf build in nonsalt facilities and a 10 Bcf build in salts. The East and Midwest each added 22 Bcf to stocks, while the Mountain region reported a 7 Bcf rise. A 4 Bcf increase was reported in the Pacific.

From a market perspective, extended heat could further narrow projected injections and support elevated storage deficits, exacerbating upside price risks, according to EBW. Furthermore, as the market enters the summer, it will increasingly be at the mercy of weather – and likely unable to make up gaping storage deficits in a hot weather scenario.

Bespoke Weather Services said despite some day-to-day fluctuations in the weather data, models remained “adamant” about the return of stronger heat toward the end of the month/early June. There was a new trough into the West, it said, which was allowing hotter downstream ridging to develop again in the eastern half of the nation.

The next couple of weeks were still projected to run above normal levels and may likely be the base state in place for the summer season, according to Bespoke. This is predicated on the persistence of La Niña, in which conditions are skewed hotter than normal and occasional variability is back to only near normal at times.

“The La Niña-induced western U.S. trough does mean that wind will likely run above last year’s levels, however, although wind has lowered for next week,” Bespoke said.

Meanwhile, export demand is set to return to top form in the coming weeks with the culmination of planned maintenance at various facilities. NGI data showed feed gas deliveries to U.S. liquefied natural gas (LNG) terminals surging to around 13 Bcf Thursday and holding there on Friday. This is up from around 12.3 on Wednesday. All Gulf Coast facilities were operating below 90% capacity, while Lusby, MD’s Cove Point was at 93%.

Wood Mackenzie noted that Columbia Gulf Transmission was conducting pigging from the Lake Arthur compressor station in Jefferson Davis Parish to the Rayne compressor in Acadia Parish. Consequently, operational capacity at Columbia Gulf’s Cameron LNG delivery location was being reduced to varying levels for the duration of the pig runs, which are scheduled through May 27.

“No impact is currently expected since deliveries to Cameron LNG are already so low due to Train 1 being offline for scheduled seasonal maintenance,” Wood Mackenzie analyst Kara Ozgen said. “However, depending on when Cameron LNG’s Train 1 comes back online, this maintenance could slightly limit how much flows are able to return.”

Before Train 1’s maintenance began in late April, Columbia Gulf was delivering a 30-day average of 728,280 MMBtu/d to Cameron LNG, according to Ozgen. Flows reached a max of 800,000 MMBtu/d.

Maintenance aside, the call on U.S. LNG remains strong as Europe continued to work toward a non-Russia energy supply following the Kremlin’s war in Ukraine.

In the near term, the continent is aiming to fill its storage inventories ahead of next winter, with injections escalating since the beginning of April, according to data from Gas Infrastructure Europe. Stocks were at roughly 40% of capacity, which is below the five-year average of about 45%, but roughly aligned with the previous 10-year average.

With demand light in Asia, Europe has dominated the market. NGI calculations showed three out of four U.S. LNG cargoes moving to Europe in March to take advantage of higher prices –  a trend that has persisted since January.

The White House has pledged to send another 15 billion cubic meters (Bcm) of LNG to Europe this year and 50 Bcm annually through at least 2030. The United States also has pledged to expedite approvals for LNG projects, which take years to build.

“Given what we are seeing in our data, we have no change to our idea that we have not yet seen the highs of the year in the natural gas market,” Bespoke said.

For the potential upside that remains firmly intact in the gas market, there are some huge uncertainties lurking over the market. Notably, there are increasing concerns of an economic downturn amid rising interest rates.

Global markets analytics firm Oanda Corp. noted that the stocks have suffered huge losses this week as investors doubt the Federal Reserve would be able to deliver a “soft landing” as the inflation outlook might warrant much more aggressive tightening of monetary policy. Technical selling also pushed stocks down.

“It looks like the consumer has got a couple of rough quarters ahead, and that will continue to drive economic growth concerns over the next few months,” Oanda analysts said in a note to clients.