An abrupt, albeit temporary, change in long-range weather models resuscitated natural gas forward markets for the period between Feb. 13 and Feb. 19, lifting March prices by an average 13 cents, according to NGI’s Forward Look. The double-digit increases extended into April, while smaller gains were seen for the summer strip (April-October), next winter and beyond. 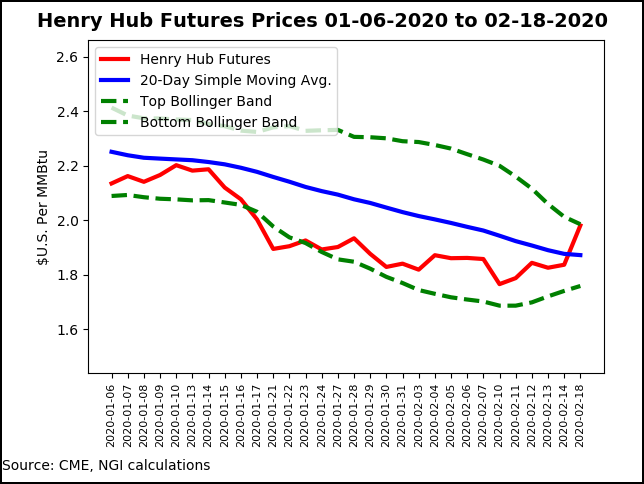 The swift move higher at the front of the curve reflected the timing of the drastic change in weather data. Models began trending much colder over the Presidents’ Day holiday weekend, adding a massive amount of demand to the outlook and catching off guard traders who returned to their desks following the three-day weekend.

Nymex futures led the rally, with the March contract blasting more than 14 cents higher on Tuesday to put $2 gas back in sight.

That changed Thursday, when the European model also took a few steps back in its outlook for the next couple of weeks. Bespoke Weather Services said this was the risk, given an upper level pattern in the higher latitudes that is “only marginally favorable” for colder intrusions into the United States, “at least for more than a couple of days here and there.”

By Friday, both weather models warmed even further, showing more than 20 fewer projected gas-weighted degree days than they had in the previous 24 hours, Bespoke said. The reason for the change was due to more of a positive Eastern Pacific Oscillation being forecast, resulting in warmer changes downstream across much of the nation, according to the firm. This, along with the positive Arctic Oscillation, another warmer signal, has been the dominant signal for the entire winter season.

“As of right now, we see little reason to believe this changes in early March, meaning that any below-normal temperatures are more likely in the western United States, with warmth growing more favored again in the eastern half,” Bespoke chief meteorologist Brian Lovern said.

The developing pattern would set up some “rather strong” year/year differences, according to Lovern, “as early March last year turned out to be very cold.” Such differences would not bode well for market bulls trying to capitalize on recently supportive storage data.

On Thursday, the Energy Information Administration (EIA) reported a larger-than-expected 151 Bcf withdrawal from storage inventories for the week ending Feb. 14. The reported withdrawal was close to NGI’s estimate of a 149 Bcf draw, but it came in several Bcf higher than most projections. A Reuters survey and one by Bloomberg each showed a median draw of 146 Bcf. A Wall Street Journal poll averaged a 147 Bcf pull.

The EIA’s 151 Bcf figure compares with the 163 Bcf withdrawn in the similar year-ago period and the five-year average draw of 136 Bcf.

Bespoke gave the report a “slightly bullish” rating, especially since it viewed the risk being for a smaller draw. It was the fourth consecutive strong number, according to the firm, and once again was “quite tight” when adjusting for weather. “It is a supportive balance if we can hold normal to colder than normal into March.”

Futures continue to flirt with the $2 mark, a level that “will be interesting,” according to Donnie Sharp of Huntsville Utilities. Speaking on Enelyst.com, an energy social media platform hosted by The Desk, Sharp said the market “usually doesn’t stay down here for very long.”

He noted that Henry Hub cash was trading around $1.98 for Friday’s gas delivery, while the March Nymex contract “is fluttering at $1.966. I still feel like one more shot for the $1.60 range, but time will tell.”

Futures were trickling slightly lower ahead of the EIA report and then climbed to an intraday high of $2.025. However, with weather struggling to sustain cold patterns later this month, and the latest European model trending milder, the March Nymex contract settled Thursday at $1.920, 3.5 cents below Wednesday’s close. Prices drifted even lower Friday.

Enelyst managing director Het Shah said recent trading action appeared to be clustering around a range from $1.80 to $2.00, but balances may be tight for the summer at such low price levels. “I see a knee-jerk reaction higher once we see insane power burns in April/May.”

It was stronger-than-expected power burns in the Midwest that led to a big storage miss in that region for the reporting period ending Feb. 14. The region experienced some of the coldest temperatures on record, withdrawing a larger-than-expected 55 Bcf from inventories, according to EIA.

The East pulled 42 Bcf out of storage, as did the South Central region, including a 29 Bcf draw from nonsalt facilities and a 12 Bcf draw from salts. The Mountain and Pacific regions each withdrew less than 10 Bcf, EIA data show. Working gas in storage stood at 2,343 Bcf, 613 Bcf above last year and 200 Bcf above the five-year average, EIA said.

There were few standouts in the crowded field of big movers for the week of Feb. 13-19, with most market hubs across the country moving fairly in sync with Henry Hub futures.

The move into the positive side of the ledger for El Paso Permian appeared to reflect the relief expected with the in-service of the Sendero Gateway Residue Lateral Project. The expected in-service date for the 400 MMcf/d project was updated in the most recent construction inspection report filed on Feb. 4, matching Genscape Inc.’s previous estimate of service in April.

Sendero Gateway is to provide an additional transportation outlet in the northern part of the Permian’s Delaware sub-basin in New Mexico from Sendero’s existing processing facilities because of an expansion completed last year at the Carlsbad Plants in Eddy County. The 220 MMcf/d Carlsbad II plant was completed in September and complements the existing 130 MMcf/d Carlsbad I plant, but, according to Sendero, without additional residue takeaway capacity, the expansion remains constrained and unable to support full operations.

In the Northeast, Transco Zone 6 NY made a splash during the Feb. 13-19 period, posting the largest gain across the country and topping even constrained New England points by a couple of cents, Forward Look data showed. March prices surged 22 cents to average $2.112, April rose 11 cents to 1.841 and the summer strip climbed 7 cents to $1.82. Winter prices were up 4 cents to $2.85, which compares to mostly small losses at other market hubs across the country.

The strong increases in New York and throughout the Northeast occurred as a blast of cold air was heading for the highly populated region. The Arctic high pressure was expected to keep temperatures below average for a brief period, according to the National Weather Service. Temperatures were forecast to begin climbing to above-average levels by Friday across the northern Plains and Upper Midwest.

“This warming trend will then translate eastward this weekend across the Great Lakes and Northeast,” the forecaster said.

In the short term, however, the cold air filtering south may support accumulating snowfall late Thursday through early Friday from the southern Appalachians, eastward across much of North Carolina, northern South Carolina and southern Virginia, where several inches of snow were expected, the NWS said.

A somewhat hotter lean in the overnight forecasts helped natural gas futures bulls regain some ground in early trading Tuesday. The September Nymex contract was up 3.4 cents to $2.187/MMBtu at around 8:45 a.m. ET. There were no major shifts in the weather outlook overnight, according to NatGasWeather, though the forecaster noted a small uptick…